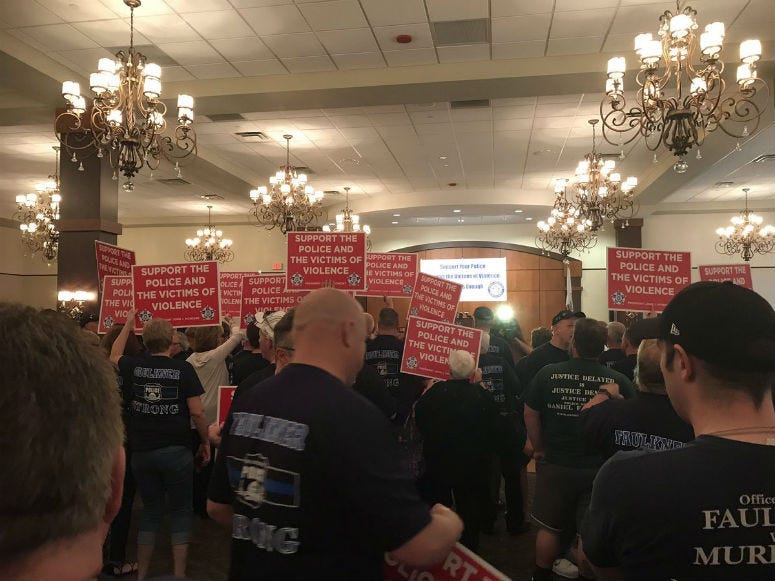 PHILADELPHIA (KYW Newsradio) — Police and victims of violent crimes protest against Philadelphia District Attorney Larry Krasner for what they are calling a miscarriage of justice.

Krasner's decision not to appeal a ruling gives way for Mumia Abu-Jamal to get his case before the Pennsylvania Supreme Court.

Jamal is currently on death row for the 1981 murder of Philadelphia Police Officer Daniel Faulkner.

"I want him behind bars," said Faulkner's widow, Maureen.

Maureen stood along side dozens of other protesters and politicians Tuesday at the Philadelphia Fraternal Order of Police Headquarters speaking out against Krasner and his decision.

"He lied to me. He deceived me, and I don't think it was fair for him to do that," she said.

Maureen believes Krasner does not care about her family.

FOP president John McNesby, who's been a strong opponent of Krasner, helped organize the rally on Maureen's behalf.

"We're going to be shopping for a new district attorney in a couple of years. We have to somebody in that office that's a chief law enforcement officer, not a chief public defender," McNesby said.

Many Abu-Jamal supporters say his case is plagued with judicial and police misconduct and he should be freed, not just receive a new trail.

Calls and messages to Krasner's office were not immediately returned.