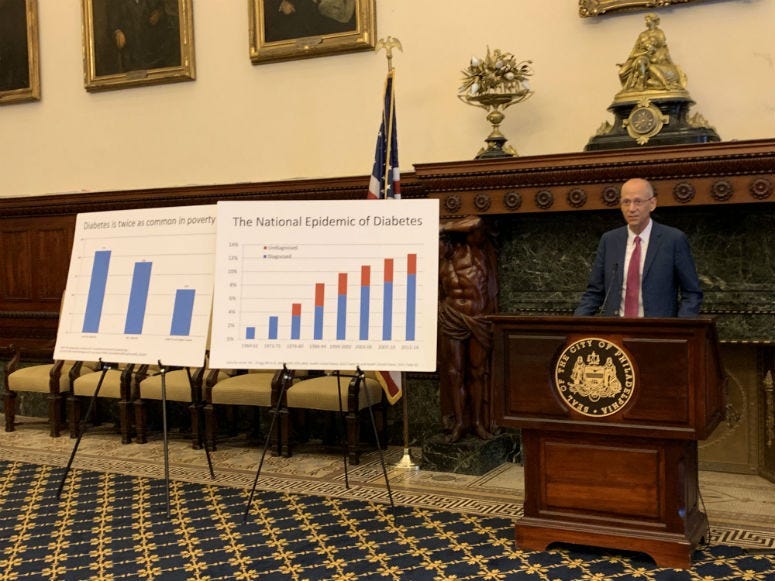 PHILADELPHIA (KYW Newsradio) —  Sugar is not so sweet when it comes to its impact on health; it causes obesity in children and leads to Type 2 diabetes in adults.

Which is why the Philadelphia health department is launching a campaign against sugary snacks with the goal of reducing the city's high rates of Type 2 diabetes and childhood obesity.

Health Commissioner Tom Farley says 22 percent of Philadelphia children are obese and one in eight adults have diabetes.

"And as bad as that is, the future, if we don't act now, looks even worse," said Farley.

The CDC is predicting that one in three children born in the year 2000 will develop Type 2 diabetes.

The ads were developed with the Center for Science in the Public Interest as a kind of antidote to the marketing of sugary snacks.

The city has already made progress in reducing consumption of sugary drinks with the soda tax, so, the Center's Joelle Johnson says, snacks have become a major culprit in the city's high rates of obesity and diabetes.

"Childhood obesity is higher among African-Americans and Latinos, communities that are specifically targeted by junk food marketers," Johnson explained.

The campaign is aimed at parents who may not know the risks that sugary breakfast foods and snacks present.

"Too many sugary snacks can lead to obesity and diabetes. I don't want that in my kids' future," Farley added.

Fortune Walker, who appears in that ad, says she was surprised by the link between childhood snacking and Type 2 diabetes.

"It seemed like it was something that affected more the elderly, but hearing now that children are being affected so early in life, it's a concern," she said.

The campaign includes print, billboards, online and TV ads. It will cost $170,000 over the next three months.