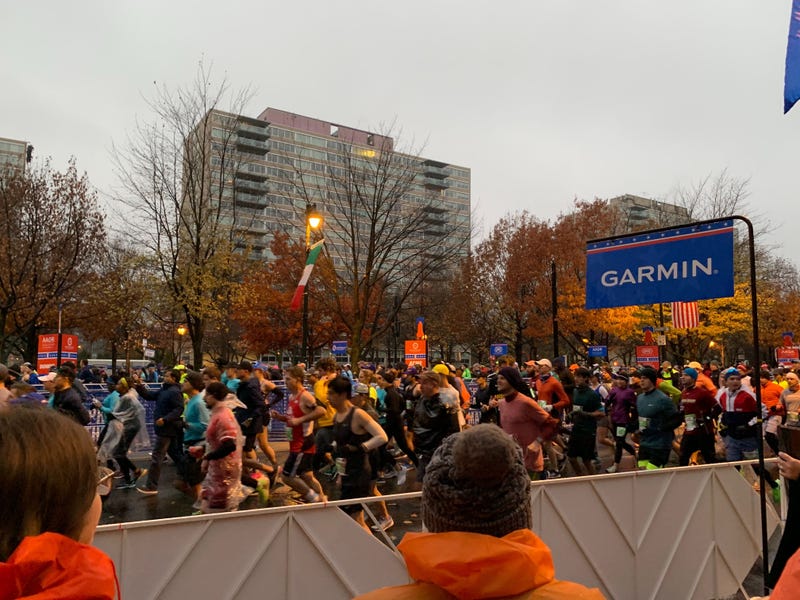 PHILADELPHIA (KYW Newsradio) — When you sign up for a race it's for rain or shine, and the Philadelphia Marathon proved that. All 50 states and at least 40 more countries were represented, according to announcers, and 30,000 people registered for the 26.2-mile race, facing a drizzle at the very least.

A portion of the proceeds from the marathon were donated to the American Association for Cancer Research.

Carol Murray, from Texas, ran with two friends. Their motivation for the race was to fulfill a challenge they made to themselves.

"We are on a quest to do all 50 states," Murray said, "and so we need Pennsylvania and this looks like a great one. Been up here before on the half and looking forward to coming out here and seeing the city by foot."

Murray's friend Rhonda Foulds said they did the Freedom Challenge, which included the half marathon and the 8K on Saturday followed by the full marathon Sunday morning. She said running the Saturday events gave them familiarity with some of the course.

Robert Brown ran with his brother Ricky, and said they had been preparing. "Just mostly, you know, a lot of fun runs with him," he said, "but then we started building up to more challenging runs like this."

Brown admitted it was their first marathon, and laughed when he joked it was also probably their last.

Ricky Brown shared the thoughts that kept him going while running. "Certainly thinking of my wife and daughter back at home," disclosed Brown. "I got a 20-month-old that's a little young to be out here. So they'll be on my mind."

The route went from Fairmount Park to the Schuylkill River, with runners weaving in and out of University City and Manayunk.

A pair of New Yorkers took home top honors. Diriba Degefa Yigezu was the men's winner, finishing first in 2:16:31, while Feyne Gudeto Gemeda finished with the best female time, in 2:32:48.