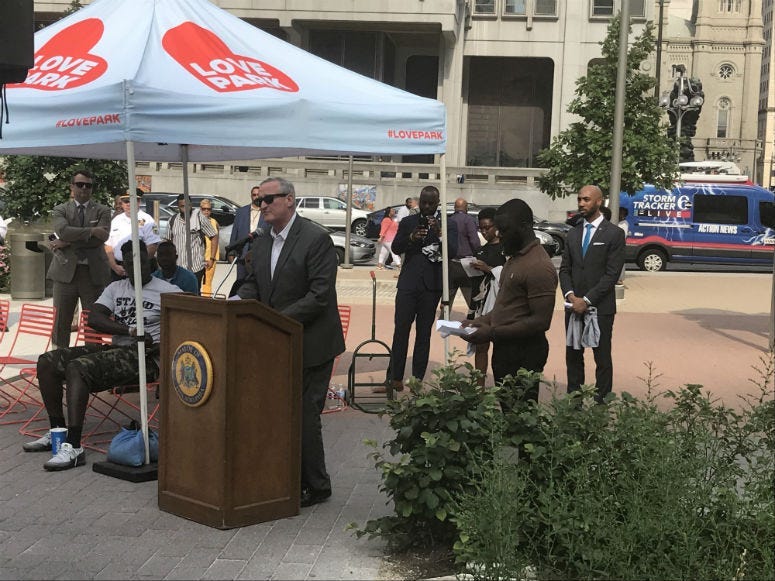 PHILADELPHIA (KYW Newsradio) — Philadelphians from all walks of life walked together as they call for end to the city's gun violence epidemic.

Cheick Diawara was born and raised in Southwest Philadelphia and during that time he's seen his fair share of gun violence with the latest incident happening just a few weeks ago.

"On Father's Day this year at my little brother's graduation cookout, there was a shooting that opened fire, and I believe six people got hurt and one person passed away," he said.

That act of violence inspired Diawara to help organize a peace rally at Love Park.

"We're expressing to our people we are not going to succumb to the violence that's continuously happening in our city," Diawara said.

Joar Dahn, who also helped organize the rally, is a friend of Diawara's little brother.

Dahn recently graduated from college and is working to better his community, but things have not always been so bright for him.

He left his home in Liberia to escape a war full of gun violence, but was surprised by what he found when he got to the states.

The shooting on Father's Day prompted him to jump into action and help organize the peace rally.

Diawara and Dahn were joined by police, political leaders and concerned citizens as they talked about what they could do to bring their anti-violence message back to their communities.

"It might be we're just preaching to the choir, and if that's the case we just want to encourage the choir to go out there and start practicing and rehearsing by actually talking to these guys that actually have the guns in these streets," Dahn said.