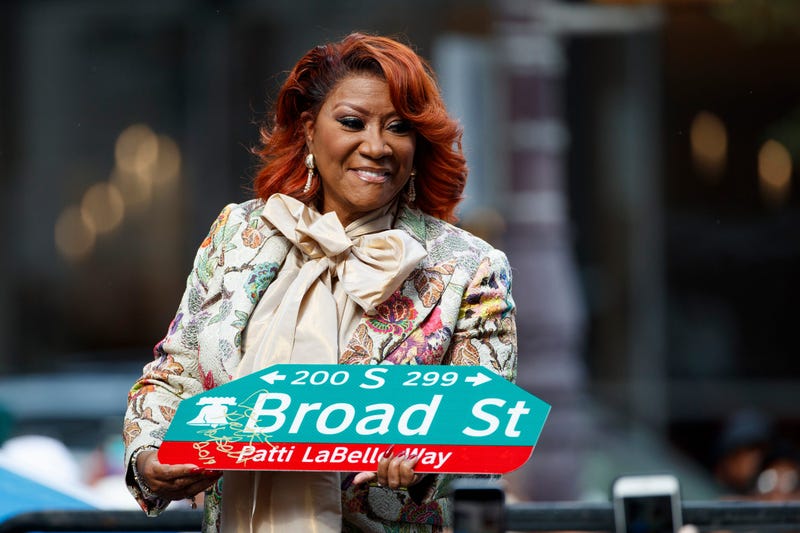 July 2, 2019 07/02/2019 10:07 pm
PHILADELPHIA (KYW Newsradio/AP) — Patti LaBelle now has her very own street in her hometown of Philadelphia, and the legendary soul singer christened it with a song.

A stretch of Broad Street was renamed "Patti LaBelle Way" during a ceremony Tuesday.

"The Godmother of Soul" thanked the throngs of fans who clogged the intersection and treated them to an impromptu rendition of her hit "Love, Need and Want You."

Brandishing one of the new streets signs, she told onlookers she felt blessed and spoke about how her parents used to walk along this stretch of road.

A bastion of musical talent, LaBelle's career spans more than five decades. Over the years Patti LaBelle began as Patti LeBelle and the Blue Belles, to LaBelle and would then go on to have a successful and decades long solo career and booming business. The now 75-year-old hall of famer, with a star on the Hollywood Walk of Fame, has also been named one of the world's 100 greatest singers by Rolling Stone.

"Lady Marmalade" was LaBelle's first No. 1 hit when she was the lead singer of LaBelle.

"I love it. She deserves it. She recorded there," says Kenny Gamble, who co-founded Philadelphia International Records, with partner Leon Huff.

The duo created the "Philadelphia Sound" at Broad and Spruce Streets. Gamble wrote and produced “Love, Need and Want You” -- the song LaBelle also sang to the crowd on Tuesday in 1982.

In the 60s and 70s, Black music institutions lined the section of South Broad Street, which is now known as the Avenue of the Arts.

"You had the Show Boat, which was at Broad and Lombard, you had Pep's places where Miles Davis, John Coltrane, Art Blakely. It was unbelievable," Gamble recounted.

Where the Kimmel Center now stand, where LaBelle was celebrated on a riser, the Fantasy Lounge was once the mainstay.  It was the place where the Black elite -- musicians, athletes and actors, as well as the local "who's who" of Black Philadelphia came to hang through the early 1980s.

"Everybody, when Patti would appear at the Merriam up the street, and they would come here after," says Adrienne Walls.  "It was like our club house."

Walls says she waited tables for owner Loretta Tucker Adams in the 1970s.

"All the ‘Biggies’ came here to get her food because she made kick-a** gumbo and things like that," says Walls. “It was a tradition."

Walls came to celebrate Patti LaBelle Way and spent the time reminiscing about the old days, when South Broad Street was synonymous with Black Music.

Today, the Black owned musical institutions that sat on South Broad Street are gone. But now at least when people look up, they will see Patti Labelle Way.

"This was the seat of Black music," she says, "and for it to be named for her is so empowering, but that story has to be remembered."

"It's a beautiful well deserved tribute to Patti LaBelle," says Faye Anderson, a historian, "but it's an empty gesture.

Anderson wants the city to do more to document the Black musical legacy of South Broad Street.

"Philadelphia has so much more to offer, but it is not documented its history. It's musical legacy," she says. "It has not been documented."

However for LaBelle, she spoke about how “Broad and Spruce” was a place she and her family walked over the years.

She told the crowd of adoring fans that the honor, giving her flowers while she's living, made her feel like a queen.

The renaming was part of the Welcome America Fourth of July Celebration and was organized in part by WDAS.

© Copyright 2019 The Associated Press contributed to this report. This material may not be published, broadcast, rewritten or redistributed.