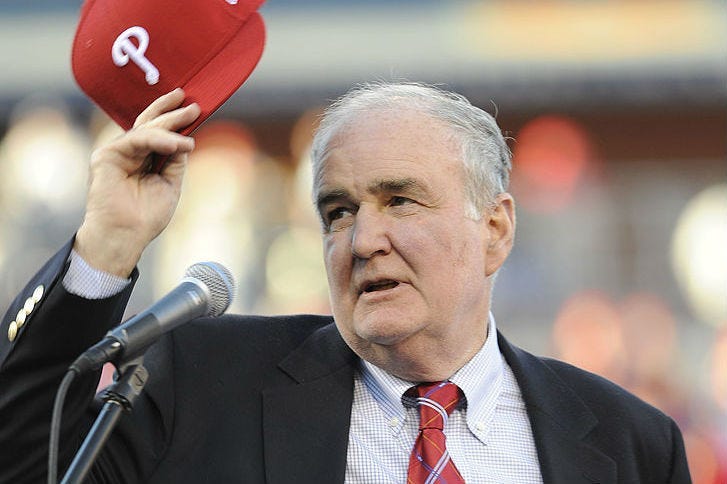 PHILADELPHIA (KYW Newsradio) — The Philadelphia Phillies have announced that chairman and former team President David Montgomery died Wednesday morning at the age of 72 after five years fighting jawbone cancer.
He would always ask to be called by his first name. And he always greeted everyone by name, whether they were a member of the front office, a gameday employee, an intern, or even a reporter.

One of the most respected and admired executives in baseball, Phillies Chairman David P. Montgomery passed away this morning at the age of 72 after a courageous five-year battle against cancer.

Montgomery spent his entire professional life in the Phillies organization.

Fresh out of the Wharton School in 1971, Montgomery landed a job working for the team he loved to follow — the Phillies — selling season tickets. And he never left, rising all the way to team chairman.

"I've been so fortunate that — I enjoyed selling tickets here. I enjoyed being executive vice president. I enjoyed, for a while I was chief operating officer," he said. "I've lived a dream. I grew up in this city, and the team I followed ended up hiring me — God knows why, but they did. And that was 1971, and I've had nothing but a wonderful ride."

In 1997, the congenial Montgomery was promoted to team president, overseeing the development of the Phillies teams that won five straight division titles and a world championship in 2008.

In 2014, Montgomery was diagnosed with jaw cancer.

"Here I am, 68 years of age. And for 67 years I got nothing but fastballs," he said at the time. "So one year, they threw me a lot of breaking balls. And maybe I didn't hit 'em too well, but at least I'm back in there. And hopefully it's fastballs for a while going forward."

Montgomery had surgery that year, and between courses of radiation and chemotherapy, he served on the committee that selected Baseball Commissioner Rob Manfred.

"At the beginning of my career in the game, David was really a mentor to me. He helped me understand how the game operated," Manfred said. "Young people often lack patience. He taught me to be a little more patient than probably was my disposition."

When Montgomery returned from medical leave, he stepped back from his day-to-day duties as team president to become team chairman.

At the time, Montgomery reflected on the finite lifespan we're all given.

Tributes have poured in across the MLB world for Montgomery, who left an impact at Citizens Bank Park.

"Today's a very hard day," said John Middleton, managing partner of the Phillies. "Also intertwined with this sorrow should be rejoicing. This is a man who lived a great life. He is an example to all of us.

"We should all be grateful that he was in our lives and for all the lives he touched, not only us personally but literally thousands and thousands of other people."

That's what most remembered of Montgomery.

"He's the best human being I've ever been around," said former manager and Wall of Famer Larry Bowa. "He knew everybody's first and last name. If you were a vendor selling popcorn or beer, if you were a clubhouse guy doing the wash, if you were a ticket holder, he treated you like you were the king."

"I remember when (award-winning Phillies announcer) Harry Kalas passed away, David said we lost our voice," recalled Executive Vice President Dave Buck. "Well, with David's passing, we lost a very, very big piece of our heart." Mickey Morandini, former Phillies second baseman and coach, said he accepted a job offer with the team after his playing days for one reason only: "Dave's the reason I came back," he said, " 'cause I knew what kind of organization he ran. I love that man so much."

Manfred added that Montgomery was the prime mover behind the decision to play the 2026 MLB All-Star game in Philadelphia, for the nation's 250th birthday.

"I really don't believe we would have made this (2026 All-Star Game) announcement ... without David being the driving force behind it," Manfred said. "You know, he has that quiet ability to persuade. And because he's such a good person, he's very, very difficult to say no to. So it's a tribute to his devotion to the city that he took this project on."

Montgomery is survived by his wife, Lyn; three children, Harry, Sam and Susa; one granddaughter, Elizabeth; and two grandsons, Cameron and Will.