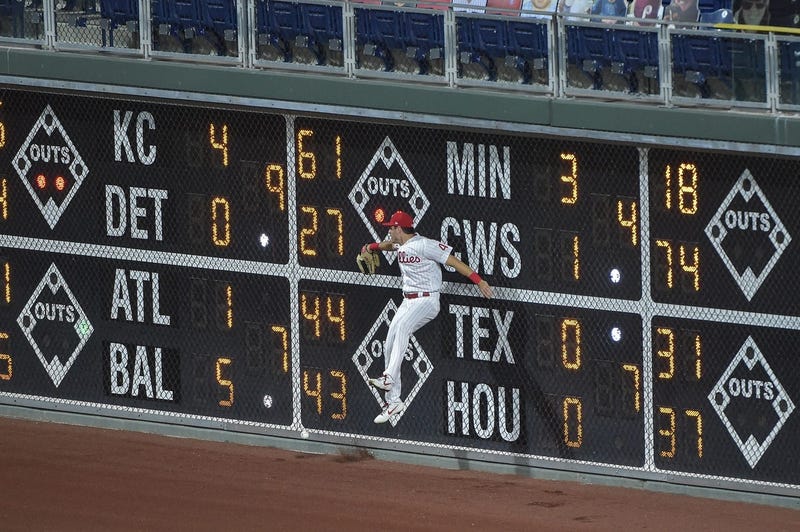 The themes that could cost the Phillies a trip to the postseason for the first time since 2011 remain consistent.

The bullpen has been a mess all season — the latest example being their 5-4 loss to the Mets on Wednesday — and injuries are grabbing just as many headlines as the games.

It’s fair to point out that, after the Phils went up 4-0 against New York in the third inning Wednesday, their offense suddenly got quiet. Zack Wheeler — compromised middle finger nail and all — left with a one-run lead with one out in the eighth inning. Adam Morgan and Héctor Neris were unable to close out the victory. Morgan allowed a two-out walk, which eventually became the tying run, and Neris dropped the ball by accident, committing a balk and moving the go-ahead run into scoring position.

“If you’re in this game long enough, there’s times where you do wanna say that,” Girardi admitted. “But I still felt like we had a chance.”

With everything that happened at the end of last night's #Phillies loss, does Manager Joe Girardi ever want to scream something like they're supposed to be better than this? @KYWNewsradio pic.twitter.com/L3W6mVEXzc

— Dave Uram (@MrUram) September 17, 2020 Yes, Bryce Harper was 0-5 on the night with three strikeouts. The Phils' right fielder is back to struggling.

“There were some signs that he was coming out of it,” Girardi said. “He’s had a tough couple days here. But we need him. We need him badly.”

But the Phils were winning 4-3 when Wheeler left after 7 1/3 innings at 95 pitches. Morgan and Neris couldn’t record five more outs without giving runs away. This season, the Phillies have scored first in 36 of their 48 games, but have only won 19 of those.

Why didn’t Girardi stick longer with Wheeler when he was at 95 pitches and the nail didn’t appear to be hindering him from going further?

“The reason we went to the bullpen tonight at the top of the (Mets) order (in the eighth inning), those were the guys that had success off of Wheeler tonight,” Girardi said.

The move backfired. Morgan walked Michael Conforto on two outs and Conforto eventually scored on a J.D. Davis fly ball that Adam Haseley arguably misplayed in right field — deciding to jump near the out of town scoreboard when he didn’t necessarily need to. Neris’ balk in the ninth put Amed Rosario into scoring position. The bullpen continues to fail Girardi and the Phils. Twenty-four-year-old JoJo Romero, who’s been one of the most reliable out of the pen, wasn’t available after pitching two innings the night before.

And Girardi argues he can’t push Wheeler and Aaron Nola well beyond their limits to avoid the bullpen.

Heading into Thursday’s games, the Phillies are 1 1/2 games behind the Marlins for second in the National League East, and barely holding onto the first wild card spot in the rest of the NL Standings.

Gabe Kapler’s Giants are neck and neck with them at 24-24, only separated by a tie breaker. A handful of other teams are separated by 2 1/2 games or fewer, including the Mets — who the Phils must beat Thursday night with Nola on the mound, even if it means avoiding most of the bullpen at all costs.