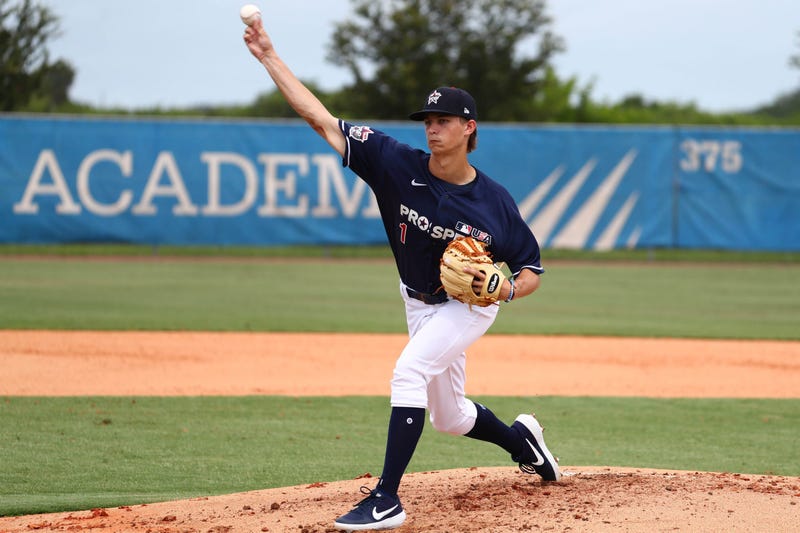 June 11, 2020 06/11/2020 1:00 pm
PHILADELPHIA (KYW Newsradio) — How’s this for a "Welcome to professional baseball" moment? Mick Abel, 18, had just heard his name called on national television by MLB Commissioner Rob Manfred as the 15th overall pick in the 2020 Draft — when he received an unexpected FaceTime call from a phone number he didn’t recognize.

"I got caught by surprise," Abel told Philadelphia media on a Zoom call Wednesday night. "I was kinda like, 'Oh, who's FaceTiming me? I don’t have the number, so I better answer.' So, I answered and see his face pop up. I’m like, 'Oh, that’s Bryce Harper. What the heck?'"

Harper welcomed to Philadelphia the right-handed high school pitcher who the Phillies believe has tons of upside.

18-year-old @Phillies first round draft pick Mick Abel after he got drafted got a FaceTime call from an unknown numberIt turned out to be @bryceharper3welcoming him. Pretty cool“Oh that’s Bryce Harper. What the heck” --#Phillies pic.twitter.com/WADkbCgUov

He also won a silver medal with Team USA in the World Baseball Softball Confederation U-18 Baseball World Cup. So, despite the the coronavirus pandemic giving Major League Baseball an unorthodox draft process and taking away Abel's senior-year season, the Phillies say they are confident the risk of taking a high school kid with such an important selection will be worth the reward.

"It was a guy that, from the very first day that I came over to the Phillies (in October), I had a conversation with our area scout up there, Zach Friedman, and he just wanted to make sure that I knew who Mick Abel was and that he loved him and wanted us to have to have the opportunity to possibly select him at this time. And that was six months ago," new Phillies amateur scouting Director Brian Barber said.

"I found out I was very grateful for it afterwards," Abel said. "My parents and I talked, coaches and I had talked, and the whole shutdown gave me a lot of time to get better and perfect my craft and be able to work diligently towards the goal of reaching this point in my career."

After sending in tapes to MLB Pipeline and having Zoom calls -- one that lasted an hour and a half with the Phillies a few weeks ago -- Abel was able to fulfill his dream of being drafted, becoming the first high school pitcher taken in this year’s field.

"When I got the call, it was a pretty surreal moment," he said. "I've always dreamed of becoming a first-round draft pick. And to be the first high school pitcher off the board, I think, is truly an honor, and I’m very humbled to be able to receive this sort of honor."

Barber said Abel’s fastball is around 94 mph to 97 mph. Baseball America reported Abel was reaching 100 mph in a bullpen session this spring .

Abel shared that he has a four-seam fastball, two-seam fastball, curveball and a slider. He said his slider can sometimes become a slurve, or feature tighter spin with a higher velocity. Barber thinks Abel can develop a legitimate four-pitch variety for the big leagues.

Barber said the Phils scouts unanimously feel Abel has the "potential to be a future workhorse and just dominating factor and presence and a top -of-the-rotation pitcher."

Abel is a West Coast kid who doesn’t know much about Philadelphia, except for the dedication of the fans.

"I’ve always heard about the fans, how Philadelphia has the best fans, no matter what sport," Abel said. "I think that’s definitely one thing that I think about when I think about Philadelphia sports, especially baseball, knowing that I’m gonna be supported by amazing fan base."

Even though Abel previously committed to Oregon State, Barber is confident the Phillies will sign their top draft pick in 2020. Abel said he did sign up with agency.

As far as what’s next for actual baseball games, we still don’t know. While major league contests will "100%" happen this season, according to Commissioner Rob Manfred, there are rumblings that the minor league season will be canceled.

What we do know is, before any of that is figured out, the Phillies need to sign Abel regardless, so he doesn’t go to Oregon State.

Instead of worrying about minor league ball, or when he’ll get to pitch at Citizens Bank Park, Abel made sure on Wednesday night he was simply relishing the moment.

"Just being able to soak in the fact that I’ve been drafted by the Philadelphia Phillies, it’s a special feeling, and I don’t really know if I’m ready to give that up quite yet and start thinking about everything that’s to come in my career."