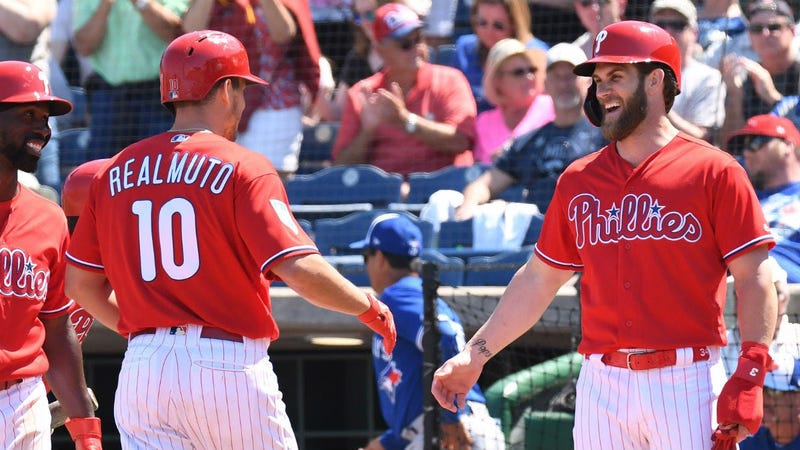 PHILADELPHIA (KYW Newsradio) — For the first time since 2012, and arguably as far back as 2011, the Phillies are legitimately expected to compete for a trip to the postseason, and maybe even further than that.

It's one of the best days of the years: Phillies Opening Day. And there's going to be a buzz at Citizens Bank Park that's been missing for a long time. The excitement is back in large part because of the acquisition of superstar Bryce Harper, who signifies a change in mentality for an organization that has been rebuilding in recent seasons, making the Phils almost an afterthought at times to Philadelphia sports fans disgusted by the decline after five straight National League East Championships between 2007 and 2011.

But Harper isn't the only addition the Phillies made since finishing 80-82 in 2018. General Manager Matt Klentak said the organization experienced an "objectively excellent" off-season prior to even landing Harper. While the club likely wouldn't have a seen a rapid spike in ticket and merchandise sales without Harper, Klentak wasn't wrong about the great moves he made before signing Harper to what was a record-setting 13-year, $330 million contract.

Here's a breakdown of your 2019 Philadelphia Phillies:

Bryce Harper (RF)Harper brings a superstar, MVP-caliber pedigree from his seven seasons with division rival Washington. In 50 career games at Citizens Bank Park as a visitor, he's hit 14 home runs and 32 RBIs. Harper is expected to hit third in the lineup Thursday afternoon, a spot he'll likely be in most of the season, which should help first baseman Rhys Hoskins a ton in the cleanup role.

J.T. Realmuto (C)The trade for All-Star catcher J.T. Realmuto was unfortunately, but understandably, overshadowed by all the Harper hoopla of spring training. Realmuto is arguably the best at his position in the entire sport. He's coming off a season with 21 home runs for the Marlins, and that was with playing half his games in Marlins Park, which is a nightmare for hitters. Look for Realmuto to be instrumental for a young pitching rotation, and to shore up the heart of the Phillies lineup.

Rhys Hoskins (1B) Hoskins is coming off his first full Major League season, one that featured 34 home runs, but highs and lows. Hoskins was playing out of position in left field last season, but trading Carlos Santana to the Mariners freed up first base, allowing Hoskins to go where he's most natural. Hoskins has the capability of being an All-Star for years to come and likely hitting behind Harper most of the time will probably do great things for his numbers. Look for a big season from Hoskins, one of the leaders on this Phillies club.

Jean Segura (SS) The big return of that trade with Seattle was All-Star shortstop Jean Segura, who will bring production to that position after it was virtually non existent in 2018. Most importantly, he'll improve the Phillies defense, which was flat-out dreadful in Gabe Kapler's first year as manager.

Andrew McCutchen (LF) Andrew McCutchen may be on the decline as 32-year-old outfielder who was once an MVP in his prime with the Pirates. But he's still an upgrade at a position that was occupied by Hoskins last season, and he brings veteran leadership to the clubhouse. McCutchen still hit 20 home runs last season between the Giants and Yankees, and featured a .421 OBP during his short time with New York. Kapler is starting the season with McCutchen in the lead-off spot, which allows the lineup to have greater depth because Kapler can then move second baseman Cesar Hernandez further down.

Odubel Herrera (CF) No one will argue that Odubel Herrera is a talented outfielder who can take over a game, but it's not as much about his ability as it is about his focus. Herrera had a great spring after missing a good chunk with a hamstring injury, but Kapler gave Herrera a tremendous amount of praise for his work ethic while recovering from that injury and for coming into camp in better shape. If Herrera can make you cheer more than shake your head, the Phillies are going to have a really good season.

Cesar Hernandez (2B) Cesar Hernandez is coming off his best production season with 15 home runs and 60 RBIs. He also played a lot of that season with a broken foot. In previous years, Hernandez was one of the more solid players on bad teams. Now he's a solid player on what's supposed to be a really good team. How much better does that sound?

Maikel Franco (3B) Maikel Franco is going to be the Opening Day starter at third base after an encouraging spring. Scott Kingery was decent as well, so he could certainly see some time at third base when Franco doesn't play. Kapler is slotting Franco eighth on the Opening Day lineup against the Braves. If that remains consistent for a lot of the season and Franco displays the power he's capable of, that's a pretty good eight hitter.

BenchKingery is going to be the Phillies super utility guy who can play either third base, second base, shortstop or the outfield. Kingery was disappointing during his rookie season, but with the additions made, the pressure should be off a little. Maybe that will help.

Nick Williams became a bench player when the Phils landed Harper, but Kapler referred to Williams as a "closer" because of the threat he brings as a reserve. Williams hit some key pinch hit home runs in 2018. There's no reason to believe he can't do that again.

Rounding out the bench are catcher Andrew Knapp, outfielder Aaron Alther and outfielder Roman Quinn, after Quinn gets fully healthy. He's battling back from an oblique injury. The injury-prone Quinn is lightning fast with a decent bat, but can never stay healthy for a sustained period of time.

Rotation Aaron Nola — Ace of the team. All-Star. Cy Young candidate last season. Look for Nola to build upon his career year of 2018. Nick Pivetta — Capable of having electric stuff. Needs to be consistent. Jake Arrieta — Veteran arm. Former Cy Young winner. Inconsistent in 2018, but that could be attributed to a knee injury he played through in the second half. Zach Eflin — Was lights out last June. Can be a solid arm in the back of the rotation. Like Pivetta, consistency is key. Vince Velasquez — Very good velocity. Extremely inconsistent. This is a big year to prove he's a reliable major league starter.

BullpenThe Phillies also made additions to their bullpen in the off-season, most notably signing former Yankee David Robertson, who's like "Houdini": able to get out of the toughest jams and situations, even if he didn't cause them. Kapler wouldn't name a specific closer when asked on Tuesday, but he did say you can expect guys like Robertson, Seranthony Dominguez, Pat Neshek, Hector Neris and even Adam Morgan in "high-leverage situations." Tommy Hunter is also a veteran reliever that Kapler called on a decent amount last season, but Hunter is currently injured. Left hander Jose Alvarez is a new addition to the bullpen, and he featured a 2.71 ERA last season with the Angels.

Expectations The National League East won't be easy. The Nationals, despite losing Harper, got better. The Mets improved, and the Braves are defending division champs. Not to mention, the Phillies need to prove that they can beat the lowly Marlins, who weren't an easy out for them in 2018.

Still, with the moves they made prior to this season, there's no reason the Phillies can't make the playoffs, either through the division or the wild card.

Kapler is in the second year of a three-year contract. The pressure is on to win now. Anything less will be considered a disappointment.