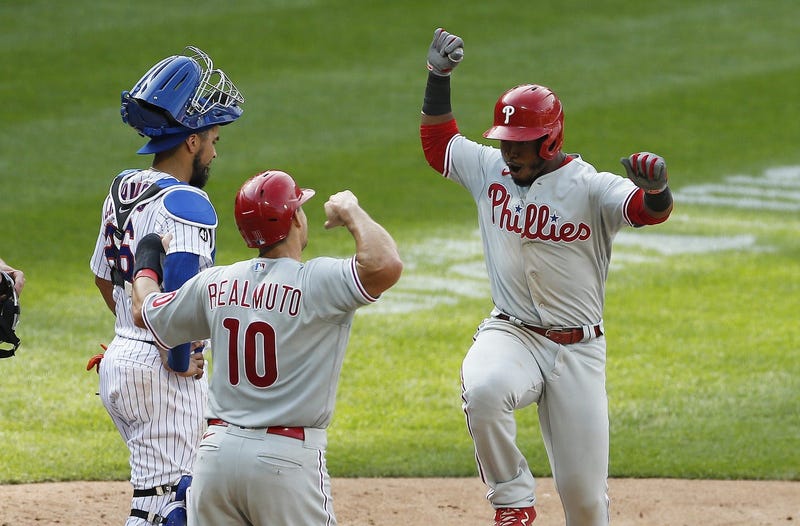 Phillies infielder Jean Segura said that he put his uniform on about 90 minutes prior to the start of Monday's game. Usually it’s 30 to 45 minutes.

"Today I was super early," he told reporters. "So, my teammates, they were freaking out, like — ‘What are you doing? It’s OK. You’re not normally dressing so early.’"

It’s unclear whether Segura did this on purpose or by accident, but there’s a little bit of a back story to his outstanding performance in Monday’s 9-8 win over the Mets in 10 innings.

First baseman Rhys Hoskins took notice. Segura said he Koskins asked him how many hits he was going to get.

Those four were plenty — and the final hit was the play of the game.

The Phils had coughed up a 6-0 lead and were close to dropping three out of four to the Mets, leaving Flushing with an awful taste in their mouth ahead of a very difficult stretch.

But, trailing 7-6, the Phils tied the game and forced extras. In the 10th, Segura launched a two-run home run off a green M&M sign at Citi Field to put the Phillies in front by two runs, enough to hold on.

Segura didn’t get five hits, but he drove in five runs, which included a three-run double in the first inning.

This is because Jean Segura told Rhys Hoskins before the game that he would get 5 hits today4 is good enough https://t.co/so2rE5q3ji

Manager Joe Girardi said, while he thinks some have overlooked Segura this season, the Phils haven’t downplayed his contributions — which includes a positive attitude about playing multiple infield positions.

“Jean has been special for us this year, and I really enjoy being around him, because he makes me laugh,” Girardi said. “He’s a funny guy. But I just think it showed the importance of the game — how excited the guys were. This is a big game.”

It put the Phils' record at 20-17 and two games behind the Braves in the National League East heading into Tuesday’s contests.

Maybe Segura should make a habit of getting ready earlier.

Wheeler surprised to be pulled after six

Starting pitcher Zack Wheeler was cruising against his former team until the fifth and sixth innings, when the Mets started giving Wheeler a little more trouble.

Despite Wheeler throwing only 83 pitches and holding a 6-3 lead, Girardi sent him to the Phillies' bullpen for the seventh inning, because the manager felt the righty had lost some sharpness. The move — at the time — backfired. The Mets caught up. Ultimately the Phils won, so no harm done to the bottom line.

But Wheeler admitted he was surprised.

“He just came down, told me I was done. I asked why, and he gave his explanation, and that was really the end of it. Like I said, I wanted to go back out, but you got to respect him, and he’s been around a long time, and that’s just the way it is.”

Girardi thought Wheeler was respectful, and was pleased the righty wanted to stay in despite getting taken out.

Vince Velasquez once had a regular spot in the Phillies rotation, one that he earned after strong spring training and summer camp performances.

However, after Spencer Howard came up to the big leagues, Velasquez was moved to the bullpen, and he hasn’t been used as much anymore. The last time he pitched in a game was Aug. 30, which was out of the bullpen. His last start was Aug. 20, but that was a doubleheader against the Blue Jays.

Tuesday’s twin bill is giving Velasquez another starting opportunity, as he’s going in Game 2 against the Red Sox at Citizens Bank Park.

“Do I want to start? Of course,” Velasquez said on Friday. “But it’s just a matter of acceptance and kinda just going with the flow.”

Velasquez recently went to the Phils alternate training site, Lehigh Valley, to get his reps in and make sure he was sharp.

The Phillies are fighting for first place in the National League East, and Velasquez is happy to be a part of that.

“I’m not really thinking about what my role is. I’m just here to help at any given cost.”

The best and most immediate way Velasquez can do that is by shutting down the lowly Red Sox Tuesday night.