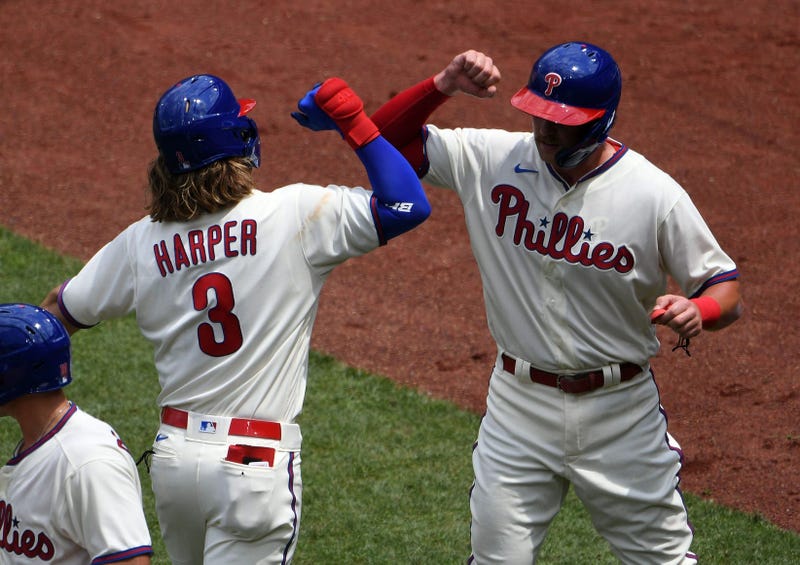 PHILADELPHIA ( KYW Newsradio) — No Phillies players or coaches have tested positive for COVID-19 in the most recent set of tests, even as the outbreak of cases among the Miami Marlins, who played a three-game series at Citizens Bank Park over the weekend, continues to grow. Phillies manager Joe Girardi delivered the news on MLB Network Radio on Tuesday.
There is still the estimated 14-day incubation time to consider, he added.

Now ... it's important to understand that just because the Phillies' tests have come back clean today doesn't clear them. The incubation period for the coronavirus, per the CDC, is up to 14 days. No positives today doesn't mean there are no positives. A good initial sign, though. https://t.co/5dQnOEurzE

The Phillies confirmed that home-and-home series between the Phillies and the Yankees are postponed.

The remainder of the home-and-home series between the Phillies and the New York Yankees has been postponed. pic.twitter.com/KaRzfTWvul

Phillies getting tested today at Citizens Bank Park, sources tell The Athletic. Players are heading to park, then straight home. Not allowed to stay at field.

"I don’t put this in the nightmare category," Manfred said. “I mean, obviously we don’t want any player to get exposed. It’s not a positive thing.”

On Tuesday, Ken Rosenthal of The Athletic reported the Marlins had four more players test positive in addition to the 13 reported members (11 players, two staff) from Monday and over the weekend.

Marlins remain in Philadelphia. One of previous team members to test positive had a subsequent test come back negative, source says. Would need two negatives at least 24 hours apart to become eligible to return. https://t.co/EG0HkVib9P

What would it take, in Manfred’s eyes, for MLB to either cancel the season or shut it down again?

"A team losing a number of players that rendered it completely noncompetitive would be an issue that we would have to address and have to think about making a change."

This did cause a wake-up call across baseball, though. Washington Nationals manager Davey Martinez said his concern level went from 8 to 12.

"I’m gonna be honest with you: I’m scared. I really am," Martinez said.

Milwaukee Brewers manager Craig Counsell said they have to double down on their efforts to be safe.

"We got a huge punch to the face, really, of like: Man, we got to be perfect here, right?" he said.

The Phillies staff who worked in the Marlins clubhouses last weekend went into quarantine. The Phillies clean each clubhouse, home and away, every day.

“We expected we were gonna have positive at some point and time. I remain optimistic that the protocols are strong enough, that it will allow us to continue to play even through an outbreak like this and completely our season,” Manfred said.

The nation’s leading expert of infectious diseases, Dr. Anthony Fauci, shared his thoughts on the matter Tuesday on "Good Morning America" when asked if the baseball season can continue after what happened to the Marlins.

“This could put it in danger. I don’t believe they need to stop, but we just need to follow this and see what happens with other teams on a day-by-day basis.”

Dr. Anthony Fauci to @GStephanopoulos on the MLB: “I don't believe they need to stop but we need to follow this and see what happens with other teams on a day-by-day basis.” https://t.co/JgCvhTifYS pic.twitter.com/Y9g7NL5HmG

One of the topics that came up during Manfred’s conversation with Tom Veducci Monday on MLB Network was the fact Major League Baseball chose to play in their home ballparks with regional travel, while the NBA and NHL, as well as other professional leagues, are playing in hub environments, or “bubbles.”

Sixers head coach Brett Brown has gushed on many occasions since the Sixers arrived in Disney World about the protective campus the NBA has created, and believes it could be a blueprint for many industries.

Manfred explained to Verducci that it wasn’t feasible to have baseball be in one or two locations like basketball and hockey.

The testing and intake protocol has begun for NFL training camps. Eagles head coach Doug Pederson talked on Monday about how the protective measures the NFL and the Eagles are taking with the coronavirus still out there.

Tuesday morning, WIP’s and NBC Sports Philadelphia’s Ray Didinger shared his thoughts with KYW Newsradio about the start of camp during this uncertain time, and how he’s feeling about the chances the season takes place. To hear the entire interview, subscribe to the KYW Sports Pod, or listen below.