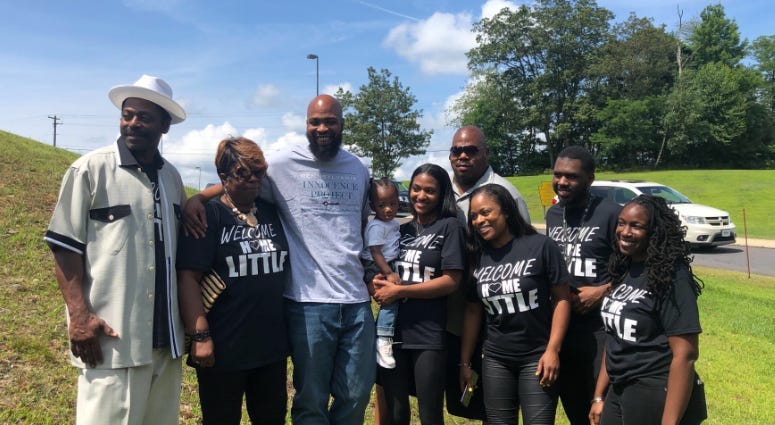 July 31, 2019 07/31/2019 7:37 pm
PHILADELPHIA (KYW Newsradio) — Another Philadelphia man's murder conviction was overturned Tuesday after he spent 22 years behind bars for a crime he did not commit.

Testimony decades later revealed the prosecution's entire case was based on the lie of a single witness.

John Miller was in his 20s when he was convicted for the 1996 robbery and murder of a Philadelphia parking attendant. The key piece of evidence to his conviction was the testimony of a witness who claimed Miller told him he committed the crime.

However, that testimony was false. The witness even wrote to the victim's family to admit to his lie.

"It was essentially the statement of one person who claimed that John Miller confessed to him," added attorney Tom Gallagher, who represents Miller. "At the preliminary hearing, that one witness recanted and has recanted at every opportunity ever since. And even more interesting, in 2011, admitted to the murder himself."

Gallagher, chair of the executive committee at Pepper Hamilton, took on the case in 2011. Last month, his team convinced a federal court to order a new trial. On Monday, the Philadelphia District Attorney's Office filed a motion to drop the charges, citing insufficient evidence to uphold the conviction and city Brady violations by prosecutors, who withheld information that would have impeached the key witness.

The court approved the motion on Wednesday, and now, Miller will go free.

"Mr. Miller will be released from prison, where he has been serving a life sentence," said Gallagher. "He's grateful for the help and he's grateful that he'll be able to return to his family."

Earlier this month, Chester Hollman was also exonerated after 28 years behind bars for a murder he did not commit. In May, Terrance Lewis was set free, too, after 21 years of wrongful incarceration. He has sued the city citing rampant police misconduct.