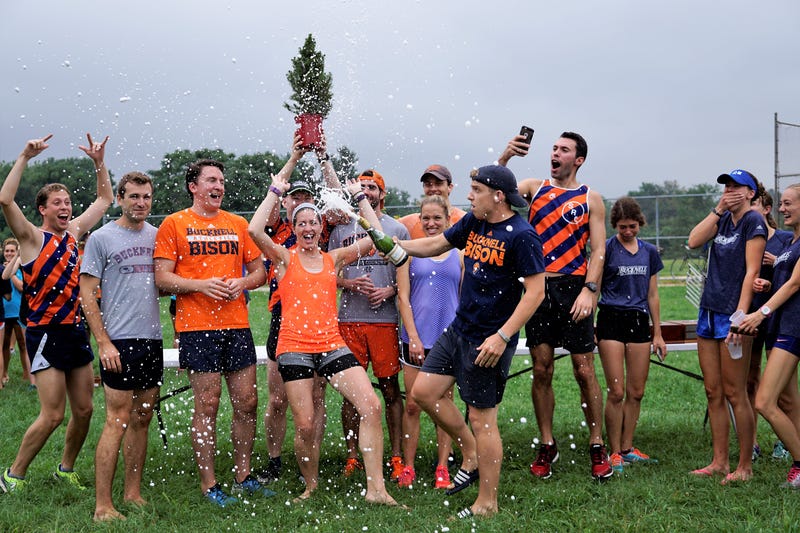 PHILADELPHIA (KYW Newsradio) — If you see people running around in Philadelphia Saturday, taking selfies in front of strange objects and places, what you may be seeing is the kick-off of the “Mayor’s Cup.”

That’s an annual race that has gone online this year because of COVID-19, as many races have, but organizers wanted to retain its usual quirkiness so they’ve created special challenges, starting with a scavenger hunt.

“We wanted to find a way to keep these running clubs connected in some way,” says Johanna Goode, one of the organizers. “In the absence of a structured plan, we wanted to give them something to talk about while they couldn’t run together.”

The Mayor’s Cup is already unique among Philadelphia races, in that it pits club against club rather than individual runners against the rest of the field.

Goode and co-organizer Anthony LoCicero were inspired by the the large number of small clubs in the Philadelphia running scene. It’s different than other big cities, such as New York and Boston, where there’s one pre-eminent club that runs the marathons.

LoCicero thinks that creates more of a sense of community among the runners.

“If you get smart people together, they have their own good ideas that bring positive change in the community whether it be in running or any other part of life,” he says.

The Mayor’s Cup, it should be noted, has nothing to do with the mayor. LoCicero says a friend came up with it when they were thinking of cool names for races. He decided to use it, though, when he came up with the idea of a Philadelphia-centric race for running clubs.

He applied for a permit to hold the first one in 2015 at the iconic Belmont Plateau cross country course. The location is also convenient to park roads so clubs could enter whether they focus on trails or road races. The only date available was mid-August—not an ideal time for racing—but LoCicero, an engineer, took it. He expected perhaps ten clubs. Thirty registered.

“Neither Johanna nor I had organized a race before,” he says. “The morning of the first race was a chaotic mess. We were running around with our hair on fire. But from a participant perspective, they didn’t notice. They had a great time.”

By May, they realized they wouldn’t be able to hold an in-person event. Many races have been postponed or canceled. Some have gone online with the help of apps that record individual runs. Neither seemed to fit the Mayor’s Cup spirit.

“We didn’t want to do something that rewarded only one type of runner, like the fastest or the ones that run the farthest, because we like to bring together all types of runners so we wanted to find some different types of challenges that will let people each share their strengths and specialties,” says Goode.

There are speed and distance challenges but there’s also the scavenger hunt with a 150-item list of things to find and there’s an artwork challenge in which each team will design a route that creates an image, when put on a map in a running app.

Each challenge will have one winner. The prize is bragging rights, though even that seems beside the point to LoCicero.