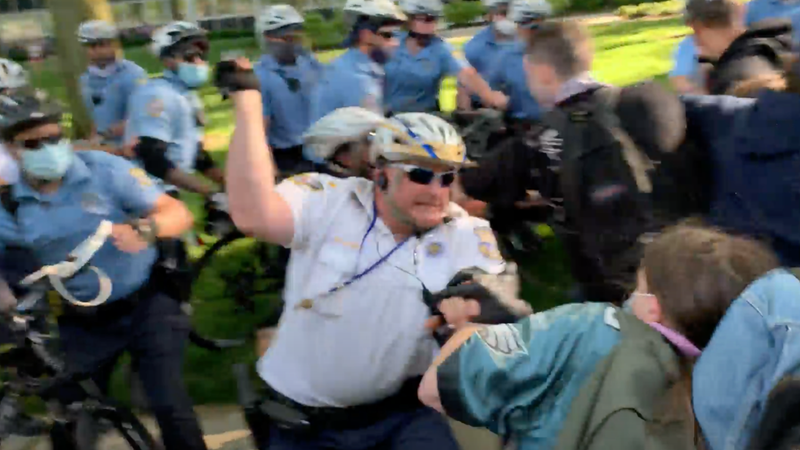 Video shows then Philadelphia Police Staff Inspector Joseph Bologna hitting a protester with a metal baton during a demonstration on June 1, 2020, near the Parkway. Photo credit Brendan Lowry/Peopledelphia on Twitter
By Tim Jimenez KYW Newsradio 1060

PHILADELPHIA (KYW Newsradio) — Philadelphia Police Staff Inspector Joseph Bologna has been released on his own recognizance after turning himself in Monday morning at 2nd and 15th District headquarters. This comes after the District Attorney’s Office announced charges against him for reportedly hitting a protester.

Bologna and his high-profile attorney, Fred Perri, first stopped at Fraternal Order of Police Lodge 5 headquarters in the Northeast, about 7 miles away, where about 100 people — some in uniform — cheered in support of the 31-year veteran of the force.

Supporters of Philly Police Inspector Joseph Bologna at FOP HQ right now. His attorney Fred Perri is here and he’s expected to turn himself in this AM. The DA’s office filed aggravated assault charges after cell phone video showed Bologna hitting a protester with a baton. pic.twitter.com/RbuQLK1iRY

District Attorney Larry Krasner announced aggravated assault and other charges against Bologna on Friday, stemming from last week’s protests. Cellphone video from June 1 shows Bologna hit a 21-year-old Temple University student in the back of the head with a metal baton on a protest route along the Parkway on Friday.

The student suffered serious injuries — requiring 10 staples and 10 sutures, according to the District Attorney’s Office.

The student was in police custody for 24 hours, but the District Attorney’s Office declined to prosecute, and he was released.

The police union said Krasner rushed to judgment, and Bologna was in a volatile situation with only milliseconds to react. FOP President John McNesby said Bologna didn’t actually hit the person in the head. He called it a “shoulder strike,” which is “what we’re trained to do.”

“Clearly everybody’s saying and upset about (Bologna) striking this person in the head. He never, ever even came close to the head. … All that’s just a lot of rhetoric, a lot of social media nonsense,” McNesby continued. “As I’ve said 100 times, policing isn’t pretty. We’re out there trying to quell situations. We had a riot situation going on.”

Krasner said in a statement Friday: “We are trying to be fair. Accountability has to be equal. This moment demands a swift and evenhanded response to violent and criminal acts based on the facts and evidence.”