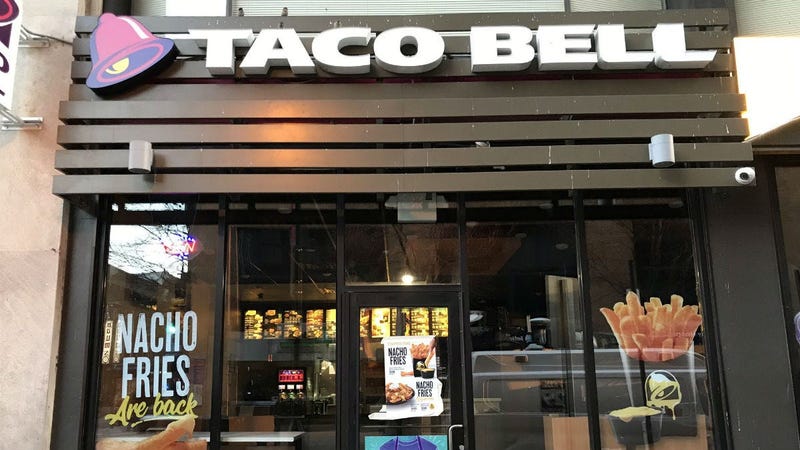 March 6, 2019 03/06/2019 12:19 pm
PHILADELPHIA (KYW Newsradio) — Police are investigating an attack caught on camera. A man says he and his girlfriend were beaten up by several employees at a Taco Bell in Center City late last month.

Bryan Reese says on the night of Feb. 24, he went to pick up friends at the Taco Bell at 11th and Chestnut streets.

His friends and a lot of the customers had been waiting an hour for their food. They all complained, and Reese says eventually, for whatever reason, several employees hopped the counter and beat him up outside the store. They even punched his girlfriend.

“Three people jumped over the counter, I backed out of the store, they continued to follow me. They put me on the ground and I don’t really remember too much else except for when I got up, my girlfriend was on the ground getting beat too,” Reese said.

"I'm angry and frustrated, absolutely," he said. "The fact that people can just jump counters and beat up whoever they want — not today, you can't do that."

Reese says in all, six employees were involved, and he and his girlfriend were scratched and bruised.

He reported what happened days later to police after he says he wasn’t getting anywhere with Taco Bell corporate. They had offered him only a $20 gift card.

He shared cell phone video of the attack on Tuesday because he says he wasn’t getting anywhere with police either.

“Right now we’re in the fact gathering phase and we want to make sure we get all the facts and get them accurately," said Philadelphia Police Captain Sekou Kinebrew. “We’re still trying to untangle this and put all the puzzle pieces together.”

Kinebrew says they’re also looking into a separate incident involving employees from the same store and a deliveryman that happened earlier this week.In a statement, Taco Bell says they’re shocked and saddened by what happened. The company says the six employees involved have been fired, and the store is now retraining the staff.