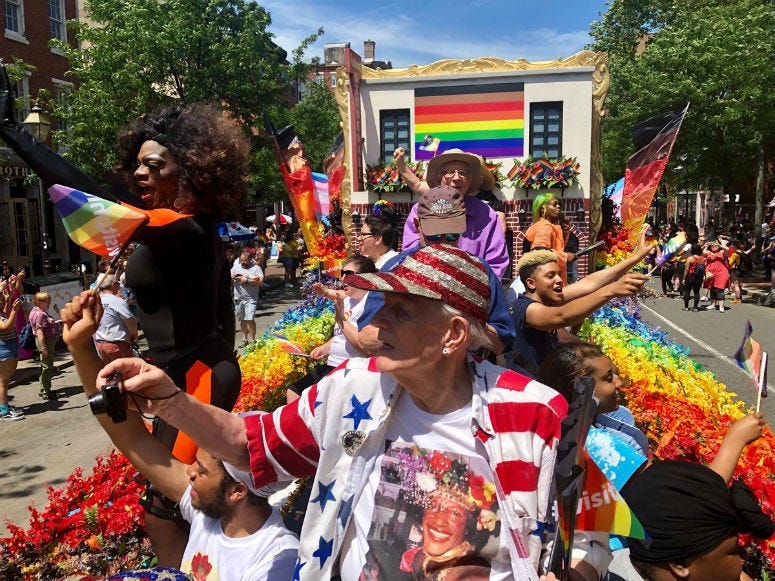 Thousands lined Philadelphia's streets from the heart of the Gayborhood to Penn's Landing, waving their pride flags, screaming and cheering as the colorful floats passed by.

This year's parade was extra special as it commemorated the 50th anniversary of the Stonewall Riots in New York.

"Stonewall was the first time that LGBT community not only rose up and fought back but we imprisoned our oppressors," said Mark Segal, who was one of the Philadelphians who played a role in that movement.

"That magic moment created gay liberation, which was the first gay organization in America to be diverse. It accepted people of color, it accepted trans people, and it accepted youth," Segal said.

Here’s a look at my sweet ride for the #Pride parade. This is the ⁦@visitphilly⁩ “Philadelphia Pioneers—On the Road to Stonewall” float! ⁦@KYWNewsradio⁩ pic.twitter.com/A2hsjkOX5o

That diversity was also reflected in Sunday's crowd with people of all ages, colors and backgrounds present.

But 50 years later. Kameron Fields says there is still work ahead.

"A lot of people are still very marginalized," Fields said. "There's plenty of states where you don't have employment nondiscrimination protections, public accommodations, being able to get housing, all those basic necessities just to live."

Yet, the smiles, laughter and joy were still the highlight of this colorful celebration.