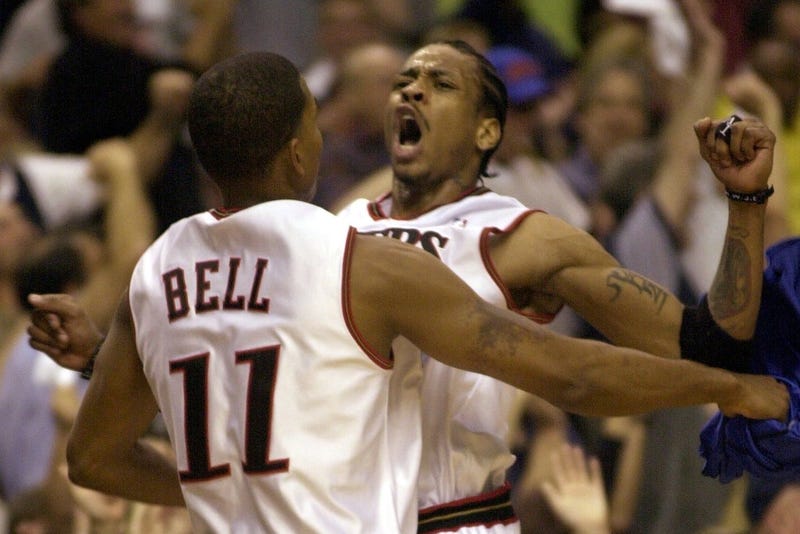 “It’s one of those things where every basketball player needs to play in a Game 7 where everything is riding on it,” 2001 Sixth Man of the Year and current Temple Men’s Basketball Head Coach Aaron McKie told KYW Newsradio.

Eighteen years is a long time, and this Sixers team had gone through a lot — an MVP season from Allen Iverson, a grueling seven-game series against the Raptors in the previous round, and injuries left and right.

A loss to Milwaukee would have erased one of the most memorable seasons Philadelphia fans have experienced — this one coming during what ended up being a 25-year championship drought among its major professional teams.

“Fortunate for us, we were playing at home, and our fans is electric,” McKie said. “They’re outstanding. Just coming into the arena, everybody’s outside. It’s loud. When you come out there to warm up, you can just feel the air in the gym is hot. And then, when you come out there (for player introductions), they shoot the fireworks and the fans are screaming. You barely can hear each other standing next to each other trying to have this conversation, and that’s basketball. That’s basketball in Philadelphia.”

The squad that was led by Allen Iverson, coached by Larry Brown and complimented by a cast of likable role players outlasted Milwaukee’s Big 3 of Ray Allen, Glenn Robinson and Sam Cassell, and advanced to The NBA Finals with a 108-91 win.

Most Valuable Player Allen Iverson scored 44 points on 17-of-33 from the floor. Defensive Player of The Year Dikembe Mutombo scored 23 points while grabbing 19 rebounds, and eight of them on the offensive end. McKie was a plus-22. And seldom used Raja Bell came off the bench and shocked everyone with 10 points in just under nine minutes of action.

“I think our guys were not gonna lose that game at home,” former Sixers President and General Manager Billy King told KYW Newsradio, “and once we had competed in (the Game 3 loss in Milwaukee) without Allen (who was injured that game), all the other guys had so much confidence that we could beat them, especially with Allen.”

The Sixers beat the Bucks and advanced to The Finals to take on the mighty Lakers.

Stay tuned to KYW Newsradio on Saturday for the Philly Sports Playback of Game 1 against Los Angeles. Listen to the KYW Sports Pod. Subscribe on the RADIO.COM app or wherever you get podcasts. ​