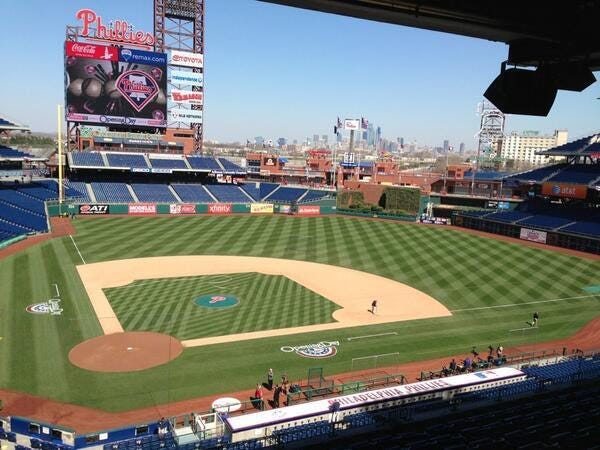 June 24, 2020 06/24/2020 11:42 am
PHILADELPHIA (KYW Newsradio) — Assuming the coronavirus doesn’t delay things further, Phillies fans will be hearing the crack of the bat — through the radio and television — in about 30 days.
“Major League Baseball is thrilled to announce that the 2020 season is on the horizon,” MLB Commissioner Rob Manfred said in a statement. “We have provided the Players Association with a schedule to play 60 games and are excited to provide our great fans with Baseball again soon.”

MLB Opening Day July 23rd or 24th, about one month from now. pic.twitter.com/ggfo6HBcb6

MLB and the MLBPA were able to move forward with a season after the union accepted the league’s health and safety protocols, and the players agreed to arrive for training by July 1.

The season is happening despite contentious and tedious labor negotiations that ultimately failed, forcing MLB to implement a schedule of its choosing.

The Players Association's somewhat swift agreement with the league on health and safety terms stands in stark contrast to the frustratingly long, financial impasse. On Monday, after the league announced it was going to implement a schedule on its own, it asked the union to respond the health and safety matters by 5 p.m. Tuesday.

The news came after 5 p.m., but it doesn't matter.

All remaining issues have been resolved and Players are reporting to training camps.

Players will be reporting for training by next Wednesday, most of which will be happening in every club’s home market. NBC Sports Philadelphia reports the Phillies will be at Citizens Bank Park, possibly their Urban Youth Academy at FDR Park in South Philadelphia and maybe even in Allentown, where the Triple-A Lehigh Valley Iron Pigs play.

Hearing Phillies will utilize the Triple A facility in Lehigh Valley, as well as Citizens Bank Park, to space out the group for spring training II, which could begin in a week if/when final health protocols are signed off on.

Spring training will officially begin July 3 (after COVID-19 test) with players arriving no later than July 1.

According to the Associated Press, arrival times will be staggered over days.

In addition to the unusual nature of a two-month schedule, the AP reports the designated hitter will be in the National League, and extra innings will start with a runner on second base—one can assume to avoid games going really long.

Nightengale adds that players who live with high-risk individuals can opt out and still get paid while gaining service time.

MLB agrees to union’s proposal in health/safety protocol that all players who cohabitate with a high-risk individual, including a pregnant spouse, has the right to opt out and be paid with service time. Previously, it was only high-risk players who could opt out and still be paid

While its not publicly known, as of Wednesday morning, how this will play out, Zack Wheeler’s wife is expecting, and Bryce and Kayla Harper recently announced they’ll be welcoming their second child later this year. For what it’s worth, Harper tweeted they’re finally coming back to Philadelphia.

Nightengale also reports that players won’t be allowed to show up at the ballpark more than five hours before the game, and can’t stay longer than 90 minutes after. He also tweeted MLB can move a team for health and safety purposes.

Players will be prohibited from arriving more than 5 hours before game time, and staying longer than 90 minutes after a game

MLB has the right to relocate teams during the regular season to neutral sites for health and safety reasons, including the postseason

In other words, MLB is taking a lot of precaution with the start of their coronavirus-delayed 2020 season.

There’s been more positive tests recently. The Phillies announced an additional four (two players and two staff) on Tuesday, after sharing that five players and three staff tested positive last week. One of the players from yesterday’s announcement was not in Clearwater, where the other positive tests have happened.

In total, seven Phillies players and five staff have recently come down with COVID-19.

Last week when it was first learned about the Phils positive tests in Clearwater — their traditional spring training home — Managing Partner John Middleton said in a statement, “The Phillies are committed to the health and welfare of our players, coaches and staff as our highest priority, and a result of these confirmed tests, all facilities in Clearwater have been closed indefinitely to all players, coaches and staff and will remain closed until medical authorities are confident that the virus is under control and our facilities are disinfected.”

There were 32 undermined Clearwater tests from last week, which have since gotten results. Other than the three positives reported yesterday by the Phillies, the rest of those tests were negative.

As sporting events begin their return in the next month or so across multiple leagues, positive tests may be a sobering new reality.

Big market MLB teams will have an advantage during the shortened season@DavidPSamson explains why -- pic.twitter.com/AehpQs2lMM

The Associated Press reported MLB teams will start their season with 30-man rosters the first two weeks, 28 the next two weeks and then 26 after that. They’ll be able to keep 60 players total, which will include a taxi squad due to the likelihood that a minor league season isn’t happening. As many as three players from the taxi squad will be able to travel to a game, with one of those players being a catcher.