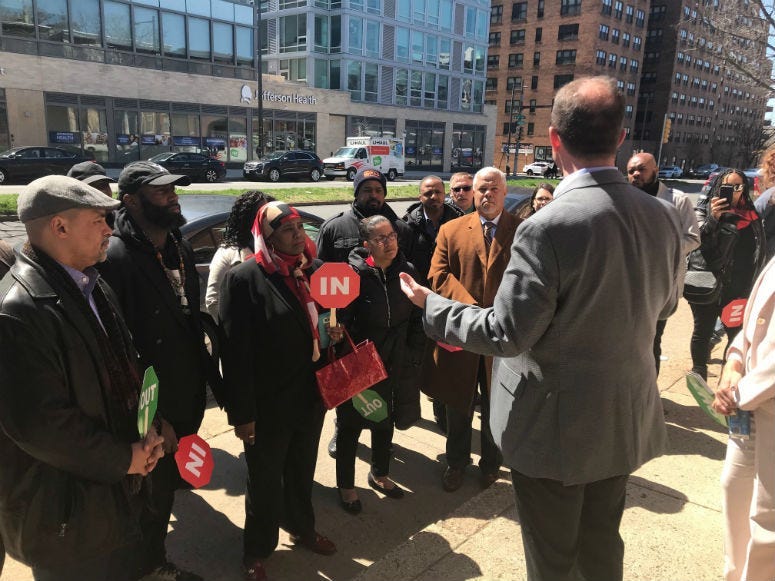 PHILADELPHIA (KYW Newsradio) — Members of the Players Coalition joined a cohort of Pennsylvania lawmakers on a tour designed to highlight the impact of enhanced mandatory sentencing, and their goal is to stop such bills before they become law.

"The idea was that we were going to target people that sold drugs to kids," said Kevin Ring, president of DC based FAMM, a group working to end mandatory minimums.

"Where we are is not in a school zone. But over there, it is a school zone," he told a group that included Eagles safety Malcolm Jenkins, ex-Steeler Will Allen and several Pennsylvania lawmakers.

Ring led the neighborhood walking tour, as attendees held signs designed to illustrate the absurdity of drug-free school zone laws. The laws, part of the war on drugs, added two years to any prison sentence if a defendant was caught selling drugs within 1,000 feet of a school or daycare.

Given the density in urban areas and close proximity to schools, low-income individuals were serving long sentences for selling minor drug sales done in their own homes. In 2015, the Pennsylvania Supreme Court struck down such laws on the grounds that process used at trial were illegal.

"But in the last two legislative sessions, they have tried to reenact it. They should stop," said Jenkins, one of the co-founders of the Players Coalition. He addressed a group of justice reform advocates at Eastern State Penitentiary Monday afternoon.

The @playercoalition @MalcolmJenkins joined pa lawmakers on a tour to discuss recent efforts to revive mandatory enhanced sentencing to fight drugs. More on @KYWNewsradio and #CBS3 on their target for this preemptive strike. pic.twitter.com/lagKxzC0WL

Senate Bill 8 was introduced in the Pennsylvania Senate in February to take on the opioid epidemic by adding enhanced sentences to individuals caught selling fentanyl. Jenkins and others want to stop overdoses, but also want to end mass incarceration.

"It did nothing to make us safer, it did not deter drug use, but it did destroy lives, particularly black Lives," said Jenkins of school zone laws.

African-Americans and Hispanics made up more than 80 percent of school zone offenders.

Pennsylvania lawmakers like Sens. Sharif Street and Anthony Williams and State Rep. Movita Johnson-Harell told the group they will vote against such laws that increase mass incarceration.