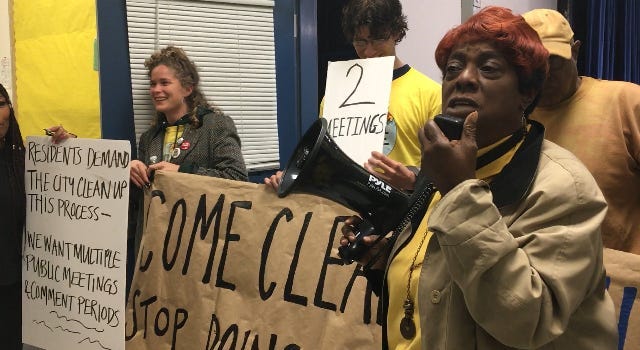 Dozens of protestors shouting "We have a right to breathe" blocked the doors of a meeting held by the city and Sunoco as remediation plans go forward for the refinery.

Protestors are demanding a seat at the table.

"We believe that everyone has a God given right to breathe clean air. We are angry at Sunoco and the City of Philadelphia because we were not included in the process," said Mark Clincey of Philly Thrive.

Community says the City not just Sunoco “..is on Notice!”.@KYWNewsradio pic.twitter.com/1zwkHogjiB

This comes after an agreement signed when the refinery changed ownership in 2012 deemed Sunoco responsible for historic contamination of the soil and groundwater and PES responsible for any new contamination. Then recently a federal preliminary report revealed thousands of pounds of highly toxic hydrofluoric acid was released into the air after the refinery explosion in June.

"There is gross contamination. They really have not sought the input of the community and some of the cleanup levels that I've seen are very high and would commit this community to having a very heavy industrial sight on this location forever," said the University of Pennsylvania's Dr. Merrilyn Howarth, who was at the meeting.

But Robin Tilley with Evergreen, who organized the meeting alongside the City of Philadelphia, argued the community's had many chances to be heard

"Since the initial Act 2 notice was submitted in 2006, there have been 24 opportunities for public involvement in the process," she said.

A spokesperson from Evergreen Resources released a statement: "We were disappointed to be blocked from holding a public meeting last night, where we planned to have a productive dialogue with interested public regarding Evergreen’s ongoing remediation activities at the Philadelphia Refinery. Our goal was to offer a summary of the process and key results of our work thus far, as well as to take questions from the public, kicking off a four-month comment period before holding another meeting next spring. We have a lot of information to share that will aid the public’s review of the Act 2 Remedial Investigation Reports."

Residents say they've only been informed of plans after crucial decisions have been made. Evergreen says information is always available online, and that they will work with the city to find more ways to share the information with the public.

Tilly says the public can submit comments to Evergreen over the next 120 days during the "comment period" and at the next meeting in March 2020.

CORRECTION: In a previous version of this story, Robin Tilley's name was misspelled.