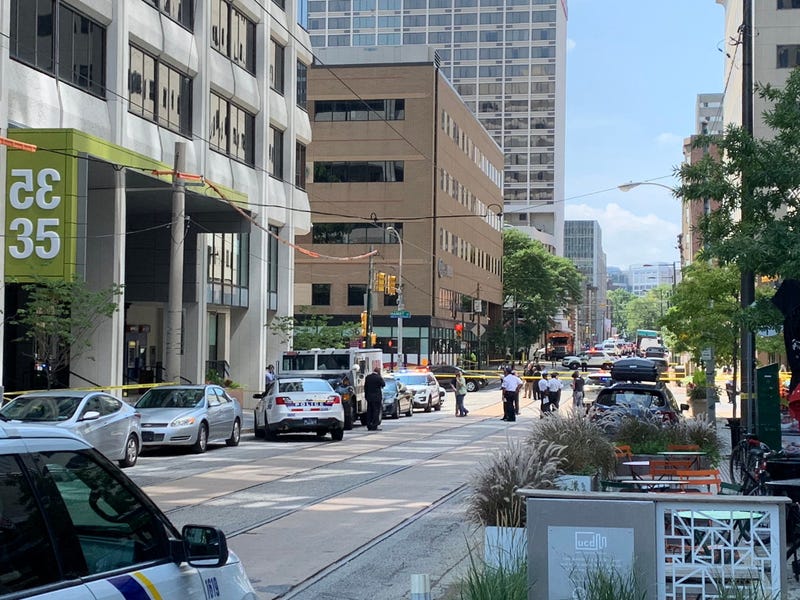 Around 10 a.m., two men dressed in black, wearing ski masks and gloves, approached a Garda armored car guard as he was making a delivery at an ATM at the PNC Bank near 35th and Market streets. One suspect had a handgun; the other had a rifle of some kind.

The men managed to get their hands on two bags of money, but not for long. Investigators say the guard's partner, sitting in the truck, got out and shot at the pair, who took off in opposite directions.

The #FBI and police search for two robbers who held up an armored car guard servicing an atm machine at 36th and Market. They failed. @KYWNewsradio pic.twitter.com/ACY0asQAXu

One man was last seen on foot running east down Market Street. The other took off in a maroon Chevy Blazer heading north on 36th Street.

They dropped both bags of money. One bag was recovered at the ATM, and the other was found around the corner. A Glock 17 handgun and an assault rifle clip containing 40 to 50 rounds were found with one of the bags.

No one was hurt, said Chief Inspector Frank Vanore. Police and FBI are searching for the two suspects, and Vanore is very confident they will find them.

"We have a lot of video at this location," he said. "We have Drexel, we have Penn, we have private cameras that we are now viewing and we are putting together. The FBI's here. We are assisting them in their investigation."

Vanore said the incident shook up a lot of people in the neighborhood. "I talked to a guy that was working construction around the corner a block away, and he could hear the shots," Vanore said.

He said it sounded like a jackhammer. Some others said they had to shelter in place until police gave the all-clear.

“This was definitely the closest I’ve ever been to gunshots,” added Alex Moser, who owns a sandwich shop about 100 yards away from the bank. “At first I thought it was just construction, but when it was six or seven in a row, I figured it had to be gunshots. And then when I poked my head out the door, it smelled like gunsmoke.

"I saw people running and figured something bad must’ve happened."