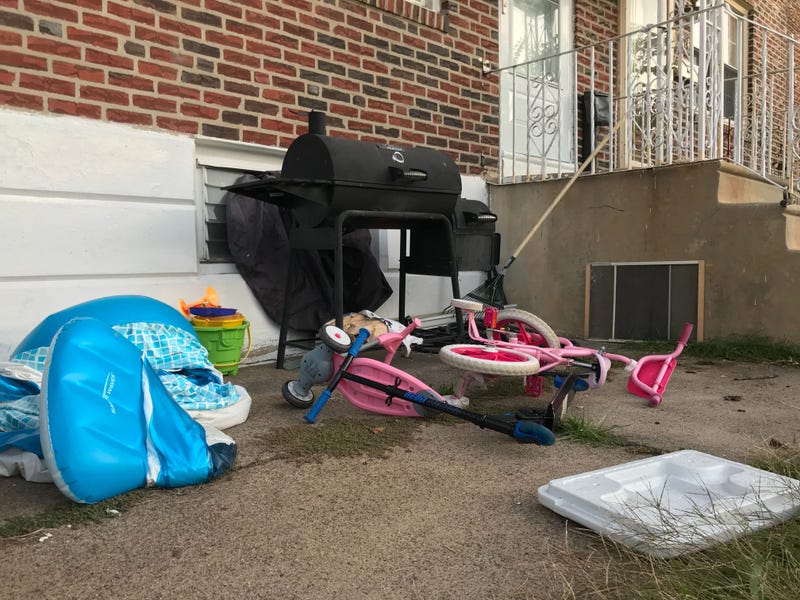 PHILADELPHIA (KYW Newsradio) — On Hegerman Street, near Robbins Street, outside of a house on the middle of the block, there's a pink bike and scooter on the ground. A blue kiddie pool is deflated next to some sand buckets and a grill. It's a normal scene for a family home with small children — except that, at 10 p.m. on Monday, police say 28-year-old Damyrra Jones shot and killed her 35-year-old husband and two daughters.

Jones will now be charged with three counts of murder, endangering the welfare of a child and possession of an instrument of crime.

One child was 4 years old, the other only 10 months.

Homicide Capt. Jason Smith said Jones then shot herself but survived, and she admitted to shooting them while in the ambulance. Jones asked them not to save her, but Smith said she's expected to be okay.

Most of the neighbors didn't want to talk about what had happened. For some, it was too sad and too difficult to comprehend. One woman, who was OK to speak but didn’t want to be identified, said her boyfriend was startled by the sound.

"He looked outside. He saw the cops running down the street, coming from all different directions. We know the police grabbed the babies and put them in their car to get them to the hospital," she said.

UPDATE: Philly police homicide captain Jason Smith says the mother who shot and killed her two daughters and husband in Tacony WILL be charged with murder @KYWNewsradio pic.twitter.com/rmBhqmHLjn

The neighbor said she didn't notice any warning signs. The family was respected, and she said the woman was kind when she was asked to sign something for a block party.

"It's kind of hard to understand what happened or what was going through her mind, because you don't know what someone is going through."

Smith said he's not sure why Jones' husband was at the house as the two were having marriage problems and he was staying somewhere else.

Smith also said she legally bought the gun she used to shoot her husband and daughters earlier Monday. They are now investigating and trying to determine what led to the shooting.

CORRECTION: A previous version of this story indicated the incorrect ages of the two girls.
KYW Newsradio's Andrew Kramer contributed to this report.