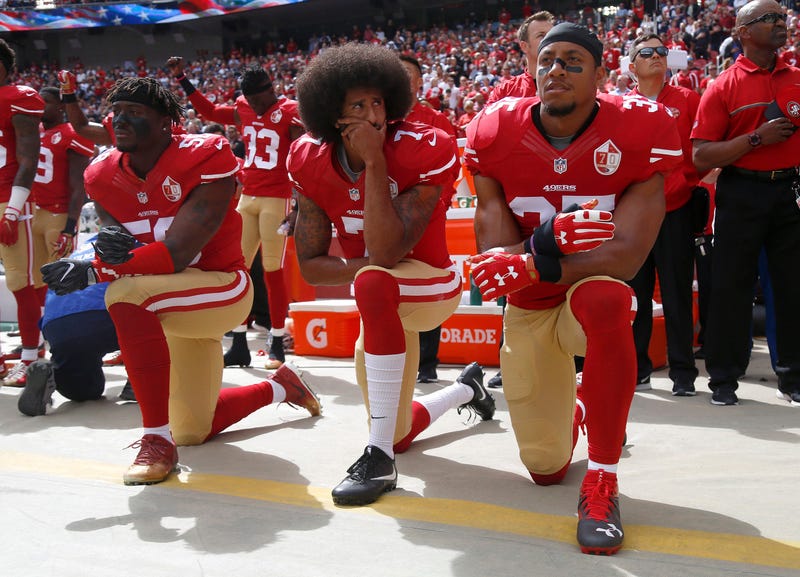 That’s an increase from Yahoo News/YouGov polls in 2018 and 2016, which had only 35% and 28%, respectively, supporting Colin Kaepernick’s protest. The former 49ers quarterback began kneeling during the national anthem to bring awareness to racial injustice in 2016 — his last season in the NFL.

This latest poll comes out as Seattle head coach Pete Carroll says another team reached out to him to ask about the Seahawks meeting with Kaepernick in 2017.

He wouldn’t say who called, but he said, “Somebody’s interested, so we’ll see what happens with that.”

Carroll says the Seahawks didn’t sign Kaepernick in 2017 because of a football decision. They believed he was more suited as a starter, and not Russell Wilson’s backup.

“We spent half a day together (in 2017),” Carroll said. "He spent time with our people throughout the building, and in almost a full day, and he was awesome. He just backed up even more of the play that we had seen and the character and his togetherness and his competitiveness, to the point where it was obvious that he’s a starter in the NFL … He was a dominant figure as a football player, and that’s how we saw him.

“I figured he was gonna wind up starting somewhere, for sure, and it just didn’t happen. So, the rest of that story is one that I regret that didn’t happen in some fashion. I wish we would have contributed to it because the guy deserved to play.”

In 2018, the Seahawks were supposed to have a workout with Kaepernick, but it never happened. Carroll insisted it had nothing to do with kneeling during the anthem. He didn’t remember the specifics and reiterated that he viewed Kaepernick as starter quality.

Carroll thinks Kaepernick “was right on point” with the anti-racist message he was trying to promote. When asked if the Seahawks could be the team to give Kaepernick the platform during this time and get him back in the NFL, Carroll said he likes the Seahawks' current situation of Wilson and backup Geno Smith.

“I regret that we weren’t the one way back when that just did it, just to do it, even though I felt that it wasn’t the right fit ... because I held him in such high regard. I didn’t see him as a backup quarterback, and I didn’t want to put him in that situation with Russ .... I wish we would’ve been a part of it when the time was available then. We’re kinda set up right now, so football wise it doesn’t seem to fit us, but there’s a lot of time here. We’ll see what happens.”