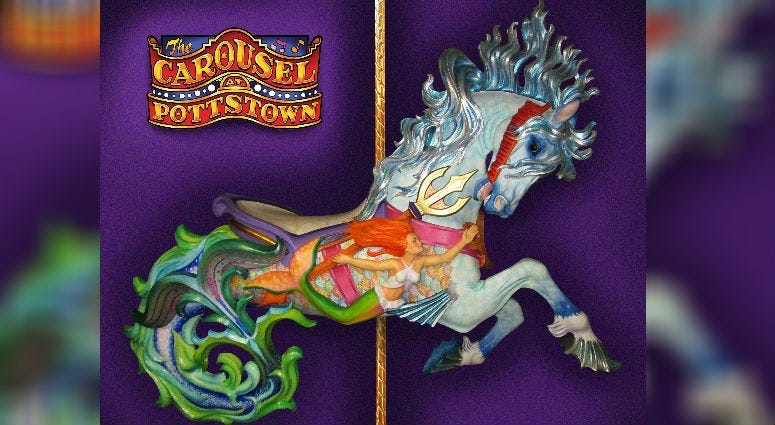 July 4, 2019 07/04/2019 8:00 am
POTTSTOWN, Pa. (KYW Newsradio) — The Carousel at Pottstown will show off its latest addition: A magical sea creature that will be unveiled on a 30-foot float at Thursday's Independence Day parade in Pottstown.

The Hippocampus is a creature from Greek mythology. Half-horse, half-porpoise, it pulled Poseidon’s chariot.

“Its hooves are fashioned to look like fins. There’s a mermaid on the side carrying a trident," said cartoonist and illustrator Alan MacBain, who volunteers with the Carousel at Pottstown.

He estimates they spent over 300 hours getting this one ready.

“I’ve painted so many and this was the last one. I thought rather than just fill in the colors, I made it a girl and her horse story,” he said.

He says as he planned how he was going to paint it, he imagined Poseidon was going to give the Hippocampus away, but his daughter, the mermaid, was so connected to the horse she ran away with it.

“I put better than 250 hours of paint on it. Point being we’re doing by hand by brush, there’s no airbrushing. It’s an old school finish and very time consuming,” MacBain explained.

There’s also armor on the side, and rather than making it metal, he painted each piece to look like a seashell.

“It was a nice idea, it worked well," MacBain said. "It was time consuming. Yeah, I should have thought that one out a little better. But the finished result it does look nice.”

The Carousel at Pottstown is one of the oldest operating Philadelphia Toboggan Company wooden carousels.

MacBain says coloring pages handed out to kids along the parade, once colored, are good for a free ride on the carousel.