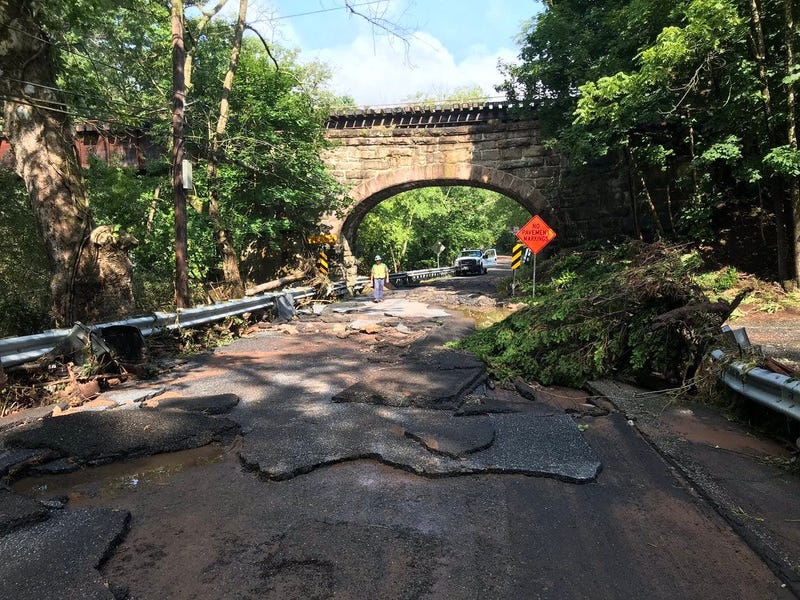 ___
DOUGLASS TOWNSHIP, Pa. (KYW Newsradio) — A 31-year-old pregnant woman and her 9-year-old son were found dead in Berks County after their car was swept away by floodwaters.

Police received a call from Pamela Snyder, saying she and her son, Preston Dray, were in danger along Pine Forge Road, because the Manatawny Creek in Douglass Township was rising quickly. Douglass Township police say she had attempted to drive through the engulfed road, and her car immediately started to flood.

Authorities tried to get to the sinking car, but their police cars started floating and they could not get to them.

While rescue crews and water units were on their way to the scene, Snyder's call with a 911 dispatcher dropped.

Police later located the Mazda they were in, which was found via drone and helicopter, about a half-mile downstream. Their bodies were recovered by rescue divers. The car has not yet been removed from the creek.

Floodwaters on the rise

The region was pummeled with rain Thursday night, sloshing around mud and debris. Flash flood warnings were issues all across the suburbs, including a rare flash flood emergency in part of Montgomery County.

Police say Ironstone Park in Boyertown was devastated by flooding. In nearby Pottstown, there were no reports of injuries, but when the Manatawny Creek rose, some cars were flooded, and basements of homes and businesses filled with water. The water has receded, but the cleanup for many is just getting started.

The damage left behind in Douglass Township where a pregnant woman and son were swept away in the flood waters. The one pic is of a picnic table that somehow got wedged by a barrier. @KYWNewsradio pic.twitter.com/wesVY7eby1

Berks County residents said they haven't seen this type of flooding since the '70s when a hurricane came through.

Long-time resident Carl Metzger Sr. said he had to manage to get to work in the aftermath of the raging waters.

“I was bailing water for over four hours to keep it out of my basement and my rec room,” he added.

He said the quick-hitting storm may have packed the biggest punch, one he’s never experienced.

“Just couldn’t keep up with it," he said. "It was like a river coming through. Never happened before that bad. We had a little water, but never like this. And I’ve been here 48 years, at least.”

The mother and child who died were swept away close to where Metzger's lives — a fact he said will stick with him.

“Breaks my heart because every time I come down here I’ll think about that.”