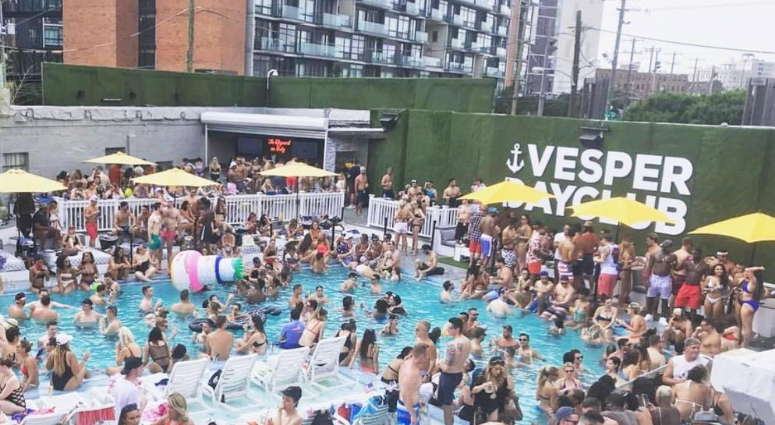 Vesper Dayclub is a private swim club on Germantown Avenue, near The Piazza and The Fillmore. It’s part resort, part 21-and-up party, complete with a bar, lounge chairs, DJ, and a big pool.

Owners say the pool is capped around 540 people, give or take, and because it’s in a residential neighborhood and intended for patrons over 21, it’s private.

Those who wish to join must apply for a membership — which is free. Those who don’t must come with a member during the week and pay a fee. On the weekends, the membership only gets you a discount on the entry fee. The public can access the club on the weekends too, but with a fee, and entry depends on capacity.

“I don’t usually get involved in things like this,” said Raina Stewart, the plaintiff in the lawsuit filed in the United States District Court for the Eastern District of Pennsylvania last month. “I’m a very lowkey person, I don’t seek out attention.”

The 24-year-old Temple graduate first visited Vesper last July with a friend, who was a member of the club and is white. Stewart, who is African-American, loved the resort’s atmosphere, so much she decided to apply for a membership. The application only asks for the applicant’s identifying information and social media accounts.

“I applied and I didn’t hear anything for a while — and a while being two or three weeks,” she said.

At first, Stewart, who has a journalism degree, said she didn’t think much of it. But when she learned that an African-American friend also applied and did not hear a response, she became suspicious. Soon after, two of her white friends applied.

“My two Caucasian friends got a response within 24 hours that said ‘you’re admitted,’ ” she said. “My one friend applied at night and had a response by 9 a.m. the next day.”

“It wasn’t just one or two reviews — it was a lot of reviews,” Stewart noted.

She called the Philadelphia Commission on Human Relations, which encouraged her to file a complaint. Eventually, Stewart got a lawyer and decided to seek redress from a court.

Vesper responded to the complaint, but Stewart decided to take the matter to the courts.

When asked if the club grants membership based on race, owner Tim Lu said, “It’s not race-based at all.”

Lu, who is Asian-American, said Stewart would have been a perfect candidate for membership, but they are understaffed and regularly receive thousands of applications.

“We got like 4,400 (applications) and I guarantee you, majority of them did not get answered,” he said.

Lu said Vesper did not deny Stewart’s membership — rather, his staff failed to respond. He said a greater amount of people who apply earlier in the season get approved, as opposed to mid-season.

“It’s sad that she felt this way, and I never want anyone to leave a place I own and be unhappy,” Lu added, “but she’s jumping to an assumption.”

When asked how Stewart’s two white friends were given memberships, while the Black applicants were ignored, Lu said it was likely an oversight. Vesper Dayclub does not keep demographic information on its members. Instead, he said, he is the main person who accepts or denies an applicant — based on attractiveness, social media popularity, and other intangibles. However, he stressed that race is not a factor.

He also said photos on social media show mainly white people because Vesper always takes photos mid-day, and, he said, people of color tend to show up later in the day.

Lu is aware of other online accusations of racism against the club, but he said not all of the complaints are about race. Many are about the venue, as Vesper has just reopened and is working at roughly one-third of its capacity to keep patrons safe from COVID-19.

“This is just another thing and we are trying hard right now,” he said. “I had hoped this would have been a conversation; maybe we could have helped.”

At this point, she doesn’t want a membership. Instead, Stewart is seeking punitive damages and a court order that would force Vesper to become more inclusive.

“It’s not about money,” she added.

Stewart invites others who may have had a similar experience to reach out to her.