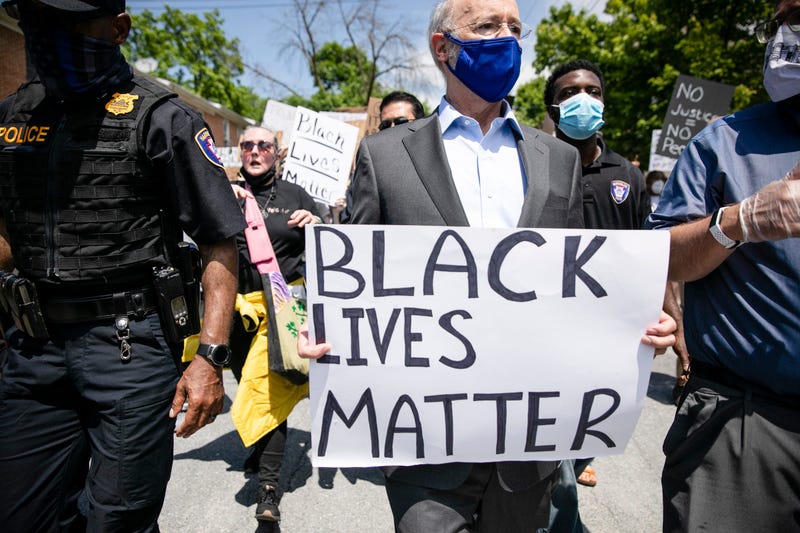 Wolf admitted marching with protesters in Harrisburg was inconsistent with his messages about avoiding large gatherings.

I’m at today’s March Against Injustice and Gun Violence 2020 in Harrisburg in solidarity with our community.Black lives matter. Racism must end. I am here to listen. pic.twitter.com/MoTYi7AtuW

Wolf was asked if he is planning to follow New York Gov. Andrew Cuomo’s advice for protesters to get tested and self-quarantine.

“I haven’t decided at this point,” Wolf replied, “but I am trying to be extra cautious. I recognize that I took a real gamble, but I thought that risk was worth taking for that specific cause.”

Several central Pennsylvania lawmakers deemed Wolf a hypocrite, since he called out those who challenged his stay-at-home orders and then violated his own rules on Wednesday.

A new Deputy Inspector General is tasked with removing waste, misconduct, fraud, and abuse in law enforcement agencies under my jurisdiction.This includes the Department of Corrections, State Police, Capitol Police, the Probation & Parole Board, and the National Guard.

Commissioner Arkoosh has no doubt that people will call her a hypocrite too, after she marched in Souderton Thursday evening. But she felt compelled to be there.

“I really did think for quite a bit about whether or not I should go,” she said. “But I thought, as the leader of this county, it was important when invited to come stand with the community under the circumstances of this protest. That it is also part of my job, to be there when the community calls … when there is such a profound and deep need for coming together.”

Arkoosh believes minority communities are already taking the brunt of the COVID-19 crisis, because, as she noted, they’re often the ones working the essential jobs that expose them to the virus.

She said it’s up to each individual if they want to participate in the marches, acknowledging it is difficult amid multiple crises.

She encourages other protesters to continue to practice social distancing and wear masks.

In other coronavirus developments, Wolf said there may be a spike in Erie County, which moved into the “yellow” phase in early May.

While the total case count across Pennsylvania continues to decline, Erie County is seeing an increase — not only in the number of positive cases, but also in the percentage of tests that are coming back positive.

“This is a concern. In fact, it’s actually alarming to our epidemiologists who believe that an outbreak is occurring as we speak in Erie County,” he said.

In Montgomery County, which just moved to “yellow,” Arkoosh said it has ramped up contact-tracing efforts as they try to prevent an increase in cases of COVID-19.

“This is one the most important next steps in terms of making sure we don’t slide back and potentially have to shut things back down again,” she said, “because our case numbers are rising and our hospitals are being overwhelmed.”

She hopes anyone who tests positive for the virus will cooperate with the people organizing contact tracing.

“Contact tracing is kept confidential,” she assured. “If you happen to expose someone, that person will only be told that they were exposed. They will not be told who exposed them.”