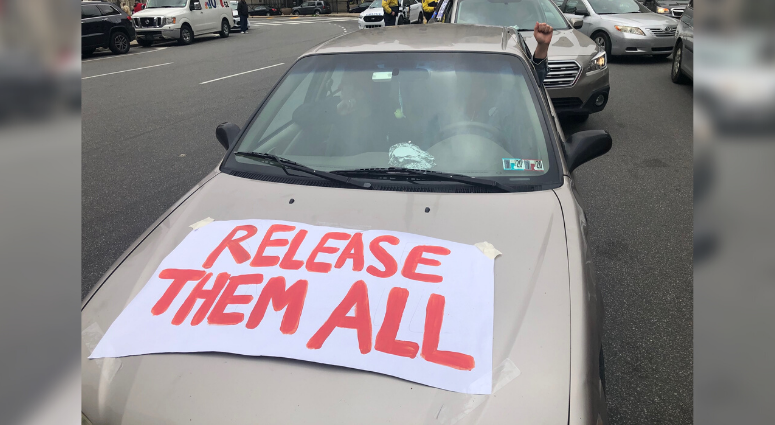 March 30, 2020 03/30/2020 11:09 pm
PHILADELPHIA (KYW Newsradio) — Protesters swarmed City Hall on Monday — in their cars, per social-distancing rules — to demand the release of low-level offenders from Philadelphia and state prisons.

The rally comes days after health officials announced the first positive cases of COVID-19 in both the Philadelphia Department of Prisons and the Pennsylvania Department of Corrections.

Dozens of vehicles drove around City Hall, honking their horns as a sign of protest. The cars bore signs and banners taped to windows, hoods and doors that read: “Inaction is Murder,” “Release Them All” and “Free Our People Now.”

At philly city hall where a coalition of groups are protesting in their cars. They want @PhillyMayor to free those in prisons on bail for minor crimes bc of #coronavirus crisis. @PhillyPrisons and Pa DOC have reported first cases of #covid19 in prisons. More on @KYWNewsradio pic.twitter.com/zveisY0olm

Police presence growing at philly city hall- as dozens of cars circle- calling for @PhillyMayor to free those in @PhillyPrisons on bail for minor offenses. Some yell “inaction is murder.” More on @KYWNewsradio #COVID19 #SurvivingCovid19 pic.twitter.com/VIWFnfOhxF

.@PhillyPolice are ticketing those protesting in their cars as they demand for freedom of those on bail in @PhillyPrisons. Officer ticketing told me the cars are double parked and ppl are endangering lives by congregating during #COVID19 quarantine. @KYWNewsradio pic.twitter.com/WJbPJaIZ0S

“Folks in prison, they are the most vulnerable at this point in time, and we need to protect them like we protect everyone else,” said Rabbi Ari Lev Fornari of West Philadelphia synagogue Kol Tzedek.

Speaking on behalf of a coalition of groups, like Black Lives Matter, Decarcerate PA, and Frontline Dads, Fornari is calling for lawmakers and other officials to free low-risk juveniles and medically vulnerable inmates, as well as those held pretrial on cash bail.

“It’s extremely dangerous for everyone inside that jail,” they added. “They are in close quarters. They are not able to access medical care. They are not properly able to quarantine.”

On Friday, the Philadelphia Department of Prisons identified two positive COVID-19 cases. On Sunday, the Pennsylvania Department of Corrections announced its first case of the coronavirus. By Monday, the corrections secretary implemented a system-wide quarantine to stop the spread of the disease.

Also on Monday, the ACLU of Pennsylvania filed an emergency petition with the Pennsylvania Supreme Court hoping to invoke the high court’s King’s Bench powers. The petition asks for the release of medically vulnerable inmates held on cash bail or probation detainers.

BREAKING: Today we filed an emergency petition with the state Supreme Court, asking them to order the release of people who are medically vulnerable to COVID-19 and those incarcerated on probation detainers or because they can't pay cash bail. We must act now or people will die. pic.twitter.com/TA1Iu6nCaS

Philadelphia District Attorney Larry Krasner joined in the call for lowering county jail populations during the pandemic, adding that “no one with any amount of public power should get to sit on the sidelines during this crisis.”

No one empowered by the people gets to sit on the sidelines during this emergency. I'm joining @aclupa in calling on the PA Supreme Court to order county jails to reduce populations ASAP to help health officials control the spread of #COVID19 https://t.co/gwx1DEqXI3

All of this comes just days after the ACLU of Pennsylvania sued for the release of 13 medically vulnerable detainees housed in Pennsylvania Immigration and Customs Enforcement (ICE) facilities. On Friday, a federal court freed two of the detainees.

“The process that we have now is not conducive to significant reductions in the prison system,” said Keir Bradford-Grey, chief of the Defender Association. “But without an agreement on who we’re prioritizing for release, we’re going to continue this dangerously slow, case-by-case process of evaluating who should or should not be released. We simply don’t have the time for that.”

In recent days, prison reform advocates have criticized the slow-paced process that the courts and other offices are using to determine which, if any, inmates should be released amid the crisis.