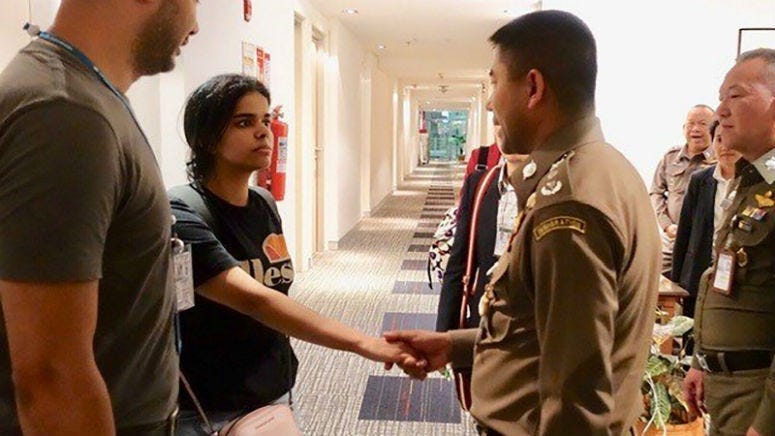 January 10, 2019 01/10/2019 3:19 am
By Helen Regan and Bianca Britton, CNN
(CNN) -- The 18-year-old Saudi woman who fled to Thailand to escape her family has been declared by the UN refugee agency (UNHCR) to be a legitimate refugee, Australian officials said Thursday.

Australia is conducting health, security and other background checks on Rahaf Mohammed al-Qunun ahead of her possible resettlement in the country as a refugee, a spokesperson for the Australian Foreign Minister's Office confirmed to CNN.

The UNHCR referred her protection request to Australia on Wednesday.

Qunun had flown to Thailand from Kuwait to escape her family who she feared would kill her because she renounced Islam. She intended to fly on to Australia, but barricaded herself in a hotel room in Bangkok's main airport on Sunday after Thai immigration officials attempted to deport her back to the Middle East.

Qunun and her supporters drew the world's attention to her case through a global social media campaign launched mostly on Twitter. She documented her arrival and subsequent detention in Bangkok on her smart phone, creating new Twitter and Periscope accounts where she received a deluge of supportive messages.

It was enough to pressure the Thai authorities to allow her access to the UNHCR and not deport her to Kuwait. Her online campaign was so successful that Saudi charge d'affaires Abdalelah Mohammed A. al-Shuaibi told Thai officials through a translator: "We wish they had confiscated her phone instead of her passport."

Qunun's father had also traveled to Bangkok to meet with Thai officials on Thursday but was not allowed to meet with his daughter.

Thailand's immigration police chief, Surachate Hakparn, said the father refuted claims that he tried to force the 18-year-old into marriage, and said that there was no abuse or physical assaults against his daughter. Qunun's father told Hakparn his daughter may have felt "under cared" for in a family of 10 children and that her mother's health has been adversely affected by her leaving.

Hakparn said he was told by Saudi Arabia's embassy that Qunun's father is a governor in the Gulf nation. The father told Thai officials that he plans to complain to Kuwait Airlines for allowing his daughter to travel, when she did not have a ticket to Australia, Hakparn said.

The spotlight is now on those countries that might assist in her resettlement.

Australia remains the only country to respond to Qunun's plea for asylum, saying that it would "carefully consider" granting Qunun a humanitarian protection visa, if she applies for one.

Earlier on Wednesday, Australia's Department of Home Affairs told CNN it would consider Qununan's "referral in the usual way, as it does with all UNHCR referrals." Australian Home Affairs Minister Peter Dutton also said there would be no "special treatment" in the case, according to CNN affiliate Nine News.

"Nobody wants to see a young girl in distress and she has obviously now found a safe haven in Thailand," Dutton told reporters in Brisbane.

A humanitarian visa would permit Qunun to stay permanently in Australia and have the right to work and study. Qunun would also be able to propose or sponsor family members for permanent residence.

But resettlement is not an automatic right for refugees, however, and less than 1% of registered refugees globally are resettled each year, a UNCHR spokesperson told CNN in an email.

In most cases, those applying for asylum in a country do so at the border or once inside, whereas those wanting to apply for an immigration status from outside the country will only be allowed to do so if they have refugee status.

Refugees can wait their whole lives for a third country to resettle them. The process is often assessed on the urgency of a refugee's individual needs with the most vulnerable prioritized. Refugees can wait from nine months to several years to hear an answer -- longer if they appeal a refusal.

Under the 1951 UN Refugee Convention, Qunun ought to be entitled to stay in the host county and have her claim heard. However, Thailand is not a signatory to the Convention and does not guarantee the rights of refugees.

In actual fact, Thai authorities have a history of sending asylum seekers and even registered refugees back to their home countries at the request of foreign governments.

On Monday, Hakparn said that Qunun was "now under the sovereignty of Thailand" and "we will protect her as best as we can."

"Since she escaped trouble to seek our help, we are the Land of Smiles, we will not send anyone to their death. We won't do that, we will adhere to the human rights principles under the rule of law," he said.

Qunun will have to wait in Thailand until Australia has considered the UNHCR's referral for refugee resettlement.

Thailand has also faced criticism for detaining former national soccer player Hakeem Al-Araibi on the request of Bahrain, despite being granted refugee status by Australia in 2017. Rights group say Al-Araibi -- who's been detained since November -- would face imprisonment and torture if he was sent back to Bahrain.

Australia's Foreign Minister Marise Payne -- who will be in Thailand on Thursday as part of a pre-planned visit -- said she would lobby for the release of Araibi.

"I will also advocate for the safe return to Australia of Mr Hakeem Alaraibi, who is currently detained in Thailand. Mr Alaraibi was granted permanent residency by the Australian Government in recognition of his status as a refugee," Payne said in a statement.

Araibi fled his home country in 2014 and was granted refugee status in Australia after speaking out about Bahraini official's practice of torturing soccer players who take part in demonstrations, according to Humans Rights Watch. He remains in custody in Thailand awaiting the outcome of Bahrain's extradition request.

Qunun expressed a wish to be granted asylum in Australia, Canada, the United Kingdom or the United States.

According to the UNHCR, the US resettlement program is the largest in the world, with 53,716 refugees being resettled in 2017. Canada, Australia and the Nordic countries also open a "sizeable number" of places annually.

To be accepted for resettlement in Canada, Qunun must be referred by the UNHCR, a designated referral organization, or a private sponsorship group. If accepted, a refugee is granted permanent resident status upon arrival in Canada and permanent residents can become eligible to apply for citizenship once all requirements are met.

"We are in close contact with partners about her situation," Maron said. "Canada will always stand up for human rights, very much including women's rights."

The US conducts its own security process to decide whether to accept a refugee for resettlement. According to the UNHCR, the process involves collecting biometric data and the application is then passed through eight government agencies, six separate security databases, five background checks, and three in-person interviews. The whole process can take up to two years.