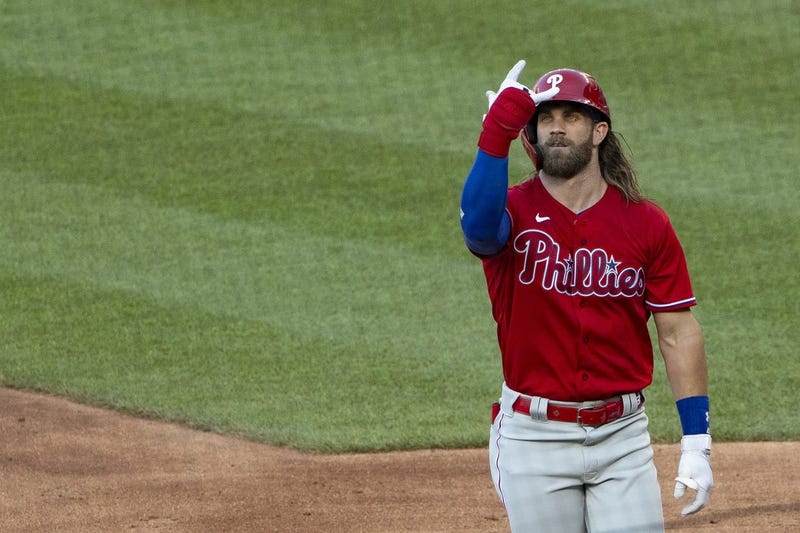 Just about the only normal things remaining this season are nine players taking the field, two teams competing in a single game, and a pitcher facing a batter. Other than that, forget it.

Nevertheless, after four difficult months, with more uncertainty in life ahead, Phillies baseball is finally back.

“This is ready, set, 60,” Bryce Harper said. “We got to win as quick as possible and as fast as possible, and if you get behind pretty quick, your season’s over.”

I guess it doesn’t help that the Phils' schedule is very difficult — the National League East and American League East are considered two of the best divisions — and they start against the Marlins Friday night. Miami gave them fits last year.

One reason for optimism is new Manager Joe Girardi, who will finally make his debut in Phillies red.

“Just to pick one, I think he’s gonna do a tremendous job of handling our bullpen — knowing when to use those guys, which matchup fits us best,” he said.

Arrieta isn’t the only one who thinks so. The question is: Will he have a good enough bullpen to manage.

Franchise icon Larry Bowa believes the teams that are successful in 2020 will have productive pens.

The Phillies released almost their entire Opening Day roster on Thursday, and the list of pitchers stands out.

The bullpen, for at least the start of the season, includes a lot of new faces: Reggie McClain, Trevor Kelley, Deolis Guerra, Ramón Rosso. Héctor Neris will close. José Alvarez could have a big role, as well as Tommy Hunter, Adam Morgan, Nick Pivetta and Cole Irvin. It’s absolutely a questionable part of the 2020 Phillies roster.

“Experience is important, but we have a lot of good young arms, and you’re gonna see some young arms in our bullpen, and it’s our job to put them in situations for them to be successful and help them grow as pitchers,” Girardi said on Wednesday, the day before the roster was released.

Put two and two together, it’s understandable why some outsiders don’t think as highly of the Phillies as the Phillies.

“At least nationally we’re being overlooked a little bit,” Hoskins said. "I think it’s gonna allow for us to have a pretty good season."

Arrieta elaborated: “I know that there are predications that have us finish somewhere around .500. But, if you ask anybody in the clubhouse, you’re gonna get a much different answer."

And both players made those comments before Major League Baseball and the Players Association agreed to an expanded postseason.

This season, 16 teams will make the playoffs instead of 10: eight from each league that have finished either first or second in their division, plus two wild card teams that have the best records after those six squads. So, chances have increased for the Phillies to make the postseason for the first time since 2011.

“In a time where we’ve all be starving for live sports, I think you’ll keep more communities involved, more cities and states involved, in the excitement of baseball, because your team has a chance to be in the playoffs,” Girardi said. "And once you get to that spot, anything goes."

“Anything goes” is the perfect way to describe an unprecedented 60-game season. Elite teams could struggle. Teams that are rebuilding could get hot early and play deep into October. Nobody knows what’s going to happen.

Opening Day at Citizens Bank Park won't be traditional, but even without fans present, the Phillies still have pregame plans — and how important in a year marred by a pandemic and social unrest.

The Phils say they'll have a symbolic showing of unity by players and a moment of silence for members of the Phillies family who have recently died and for all Americans whose lives were cut short by COVID-19.

Thursday night, before the Nationals-Yankees and Dodgers-Giants games, we got a glimpse of what that unity looks like. Players held up a long black ribbon to highlight racial injustice, and they all took a knee before the national anthem.

The Yankees and Nationals took a knee before the National Anthem tonight. pic.twitter.com/gtqR8Sk04M

Some players, such as the Dodgers' Mookie Betts, some Giants and their manager (former Phillies skipper Gabe Kapler) stayed kneeling through the anthem, according to ESPN.

All of the on-field players and coaches grabbed a ribbon and took a knee in support of the Black Lives Matter movement before the National Anthem. Mookie Betts stayed kneeling for the Anthem, as did a few Giants. pic.twitter.com/rwhNQ3U1iz

"Today and everyday, we come together as brothers, as equals, all with the same goal, to level the playing field."Morgan Freeman with words of wisdom on #OpeningDay pic.twitter.com/I8k4v09x4S

Earlier in July, McCutchen spoke about the need to help create change and solve social issues.

“I can make a difference in some way, shape or form,” McCutchen said. “So, I will be a part of things and I’m not about just talking about the problems. I'm about making the change towards whatever the problem is.”

The anthem before Phillies-Marlins on Friday is pre-recorded by Kane Kalas, son of the legendary late Phillies Hall of Fame broadcaster Harry Kalas.

Ceremonial first pitches — also pre-recorded — will be thrown by Alex Chiem, a Jefferson Methodist Hospital clinical nurse, and 16-year-old Lauren Garrett, accompanied by her physical therapist Stacey Travis-Treacy. Garrett has been recovering from a cheerleading accident that paralyzed her.