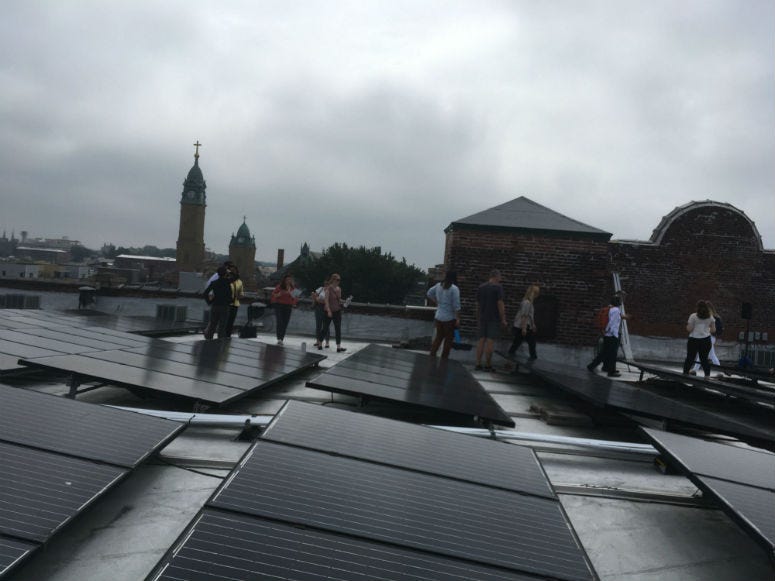 "Here in Pennsylvania, 46 percent of the jobs are in construction, and a fifth of them are in manufacturing," Dubin said.

The founder and owner of Solar States, Micah Gold-Markel, says Pennsylvania lags neighboring states, only requiring 0.5 percent of the state's energy mix to come from solar.

"We have House and Senate bills that are coming up that could easily double the amount of jobs with good, sound state policy," Gold-Markel said.

Gold-Markel adds there could be more solar energy jobs if state policy was changed to increase Pennsylvania's Alternative Energy Portfolio Standard (AEPS) to get a larger solar generation carve out.

He says Solar States has about 30 workers, many from the neighborhood, involved in installing solar arrays on homes, businesses and institutions as well as other positions.

"We have engineers, we have drone pilots who survey our sites, we have sales people and solar technicians," he explained.

He says while Pennsylvania ranks 11th among all states in clean energy jobs, there's no reason it couldn't be number one, with stronger policies for renewable energy.

They held their briefing up on the roof of the Crane Arts Building along North American Street in South Kensington, where owner David Gleeson says the 20,000 square foot roof is covered in 450-photovoltaic solar panels.

"It was the largest solar array in the city, and then we were quickly eclipsed by the Comcast Tower," Gleeson said.

Gleeson says Crane building was built in 1905 out of cast concrete faced with brick.

"I think it probably saves us about 10 percent a month on our electrical bills," he added.