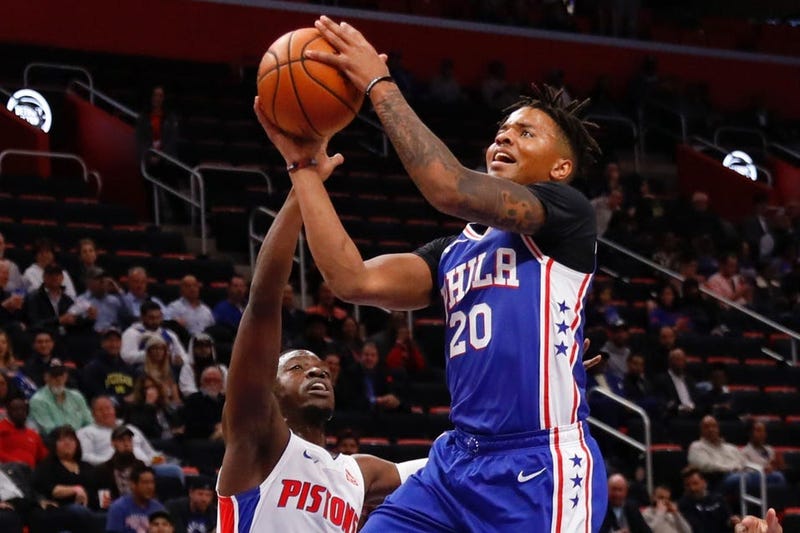 February 7, 2019 02/07/2019 8:07 pm
By Eliot Shorr-Parks and Andrew Porter
PHILADELPHIA (WIP Sportsradio) — The Markelle Fultz era is finally over in Philadelphia.
According to Adrian Wojnarowski, Fultz has been traded to the Magic in exchange for Jonathan Simmons, a first-round and a second-round pick. The deal ends Fultz’s time with the Sixers after just one-and-a-half seasons with the team.

The Magic are sending Jonathan Simmons, a first-round and a second-round pick to the Sixers, per sources. https://t.co/f724l2eSVS

The first-round pick is from Oklahoma City and the second-rounder is from Cleveland, per Kevin O'Connor.

The Magic are sending Jonathon Simmons, a Thunder first and Cavs second to the Sixers for Fultz, per source. https://t.co/OaVTy5LyIO

Fultz's struggles with the Sixers have been well documented, as the former No. 1 overall pick has played in just 19 games this season. He has played in 33 games overall since being drafted, averaging 7.7 points and shooting just 26 percent from the three-point line.

Fultz being moved to another team now cements his place near, or at, the top of the all-time busts list.

Outside of one game where he recorded a triple-double, Fultz offered almost nothing to the team during his time with the Sixers. Why it never worked with the Sixers can be debated, but regardless of the reason, the Sixers wasted multiple valuable assets to get Fultz. That decision by former General Manager Bryan Colangelo proved to be a massive mistake.

Fultz will be best remembered by Sixers fans, and fans around the NBA, for his struggle to fix his shot. Fultz, an excellent shooter coming out of Washington (47.6 FG percent / 41.3 3P percent / 64.9 FT percent) and one of the main reasons the Sixers moved up to get him, quickly became unable to shoot after his first summer as an NBA player.

Whether it is because of injury or something else, it is certainly one of the strangest things to happen in the history of the NBA.

Although the chances of Fultz becoming a productive player for the Sixers had to be considered extremely slim, it is worth noting that Fultz developing into a role player would have been a nice consolation prize at this point.

One of the Sixers’ biggest needs is a backup point-guard who can defend and knock down open shots, and take some of the burden off of T.J. McConnell.

With a cap hit of $8.3 million this season and $9.7 next season, moving Fultz became necessary if the Sixers plan on trying to sign both Jimmy Butler and newly acquired Tobias Harris this off-season.

With Joel Embiid on his rookie scale max contract and Ben Simmons likely to accept his in the near future, it is going to be tough for the Sixers to squeeze both Harris and Butler under the salary cap (projected to be around $109 million in 2019-20 and $118 million in 2020-21), and that’s without even mentioning impending free-agent JJ Redick.

Paying Fultz nearly $10 million as a potentially non-contributor yet seems irresponsible. Furthermore, Elton Brand has made it clear that the Sixers are in win-now mode, trying to make a run this season. Fultz was certainly not helping in that department.