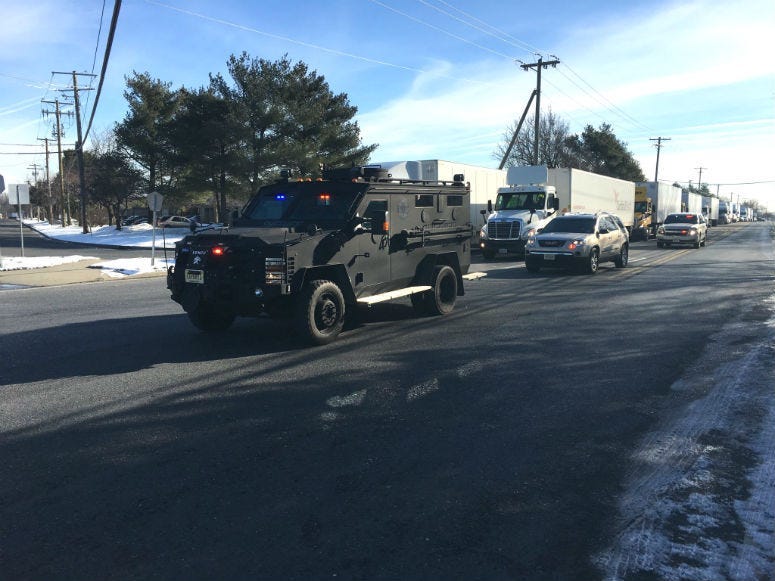 ___
LOGAN TOWNSHIP, N.J. (KYW Newsradio) — The Gloucester County Prosecutor's Office has confirmed gunfire inside a UPS distribution center in Logan Township, New Jersey.
Police are on site of what is being described as an active shooter scene inside the UPS Mail Innovations facility in the 200 block of Birch Creek Road. Authorities say they responded to a call around 9 a.m.

Local and county authorities have responded to an incident in Logan Township, Gloucester County. Media inquiries should be directed to those entities. #alert

A source from inside the facility told KYW Newsradio that the alleged ex-boyfriend of a female employee is holding her and another woman hostage.

The source added that the armed man came through a security guard station around 8:30 a.m., and there was some kind of altercation. During that confrontation, the guard tripped a panic button, alerting day-shift employees of an emergency, which summoned police.

The armed man then ran through the facility and found the ex-girlfriend and another woman. He is currently holding them hostage.

We are working with law enforcement as they respond and cannot provide information about the identity of people involved at this time. ^PG

Police have closed several roads in the area as they have surrounded sections of the building.

State and local law enforcement agencies are on the scene, including the New Jersey State Police and SWAT units.

People were evacuated to the Holiday Inn by bus a couple miles down the road. It is unknown at this point whether there are any injuries or fatalities.

There’s an active shooter in the ups warehouse down the street from my building and all I can say is this is my biggest nightmare.

The Logan Township School District has placed all schools on lockdown following police reports as a precaution. "Per Logan Police Department directive, Logan Townships Schools are in a modified lockdown," read a banner on the district's website. "All staff and students are SAFE!"

An employee at a nearby Home Depot lumber warehouse in the industrial complex said workers are also being kept inside the building.

People being moved out from ups facility, scene of Stanford in Logan twp pic.twitter.com/aqyjnb5J5u

This is a developing story. KYW Newsradio's David Madden and Steve Tawa are on the scene.