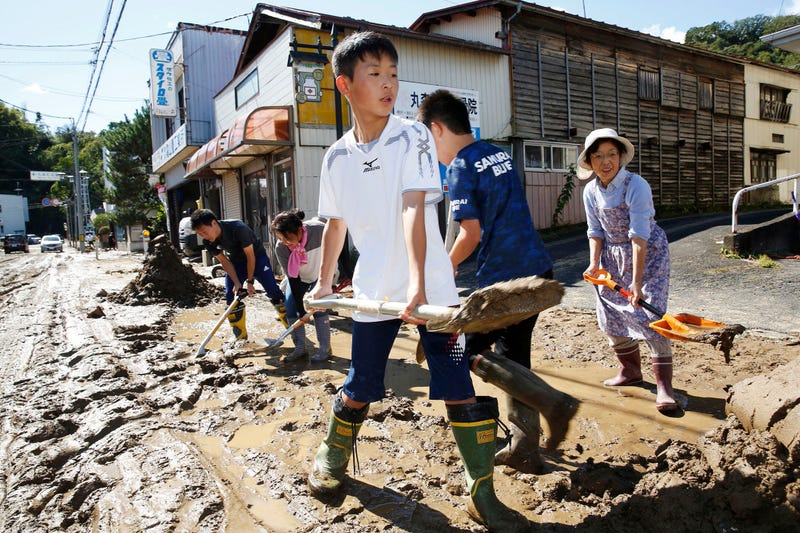 Rescuers in Japan are continuing to help people in the aftermath of a ferocious typhoon, as the death toll from the storm climbed to as high as 33.

The government's Fire and Disaster Management Agency, which tends to be conservative in its counts, said late Sunday that 14 people died and 11 were missing as a result of Typhoon Hagibis, while 187 suffered injuries. It said 1,283 homes were flooded and 517 were damaged, partially or totally.

The typhoon made landfall south of Tokyo on Saturday evening and battered central and northern Japan with torrents of rain and powerful gusts of wind. The typhoon was downgraded to a tropical storm on Sunday.

Kyodo News service has reported 19 people are dead and 16 are missing after Typhoon Hagibis caused massive flooding in Japan.

Kyodo's tally, which compiled various local reports, says about 100 people have been injured.

Government rescue teams have dispatched helicopters and boats to reach people stranded in flooded homes Sunday, part of a major rescue effort in wide areas of the country, including Tokyo and surrounding areas.

The casualty numbers continue to grow, and the Kyodo report is considerably higher than what the government spokesman gave earlier in the day.

Experts have warned from the start that assessing the damage is difficult because the flooding has struck about a dozen rivers, causing some of them to spill out in more than one spot.

He says damage to housing from the flooding is extensive but promised recovery is on its way. Some 376,000 homes are without electricity, and 14,000 homes lack running water.

Boats as well as helicopters are being deployed to the flooded areas, while rescue crew are digging through dirt in other areas to try to get people out from homes buried by landslides.

Rescue efforts for people stranded in flooded areas are in full force after a powerful typhoon dashed heavy rainfall and winds through a widespread area of Japan, including Tokyo.

News footage showed a rescue helicopter hovering in a flooded area in Nagano Prefecture, after an embankment of the Chikuma River broke, plucking people from the second floor of a home submerged in muddy waters.

Several other rivers had also overflowed, including Tama River near Tokyo, according to NHK.

Authorities warned that the risk of mudslides remained.