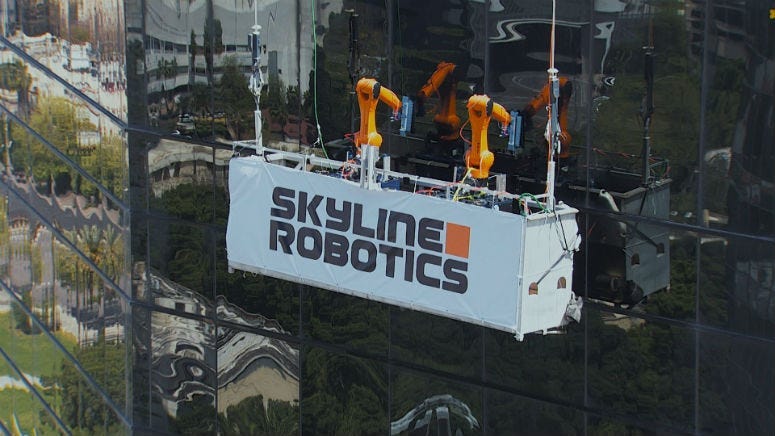 By Samuel Burke, CNN Business
(CNN) -- A skyscraper window washer regularly ranks among the toughest jobs in the world.

The role, which can pay an upward of $27 an hour, often requires workers to hang hundreds of feet above the ground. The high wages and steep turnover rates have made the industry ripe for automation.

Israeli startup Skyline Robotics wants to replace those roles with robots, while employing the same people who currently hold those jobs.

"We're hiring the window cleaners," Yaron Schwarcz, CEO and Co-founder of Skyline, told CNN Business. "We have a lot of engineers, but to operate the robot, we hire ex-window cleaners."

Schwarcz, who said the move mixes "good sense and good morals," believes window washers have "the best experience to be the supervisors for these robots."

The robot's arms and brushes clean the dirt and grime from the platforms dangling from the buildings, but a human still has to be on the ground to oversee the process at all times.

Much like it is for human window washers, one of the biggest challenges for the robots is the unexpected, such as a person opening up a window. Computer vision and touch sensors help the robots feel the building to work around these challenges.

"Think of the sensors we've developed like a human hand. We've designed the same thing for the robot so that we imitate the human hand," Schwarcz said. "Every obstacle that it might have, like a head bobbing out the window, the robot will self-correct and move around it so as not to break a window."

Unlike humans, the robots need 3D maps to do their jobs. A surface plan of the building is entered into the system, which takes into account every ledge, bump and other obstacle a robot may encounter going up and down the structure.

The filtration system Skyline Robotics uses requires no soap or Windex. Instead, it says it embraces a process called reverse osmosis.

"We hypothyroid by water, taking all the minerals out of it, and then we use the natural properties of pure water to absorb the salts, the minerals, the oils, the grit from the building," he said. "We are environmentally neutral."

The startup doesn't sell the equipment to the skyscrapers. It works with the property or facility management company. The strategy can undercut current human window washing companies by more than 10%, according to the company.

"These big companies are much more focused on HR than they are on the service part of what they're doing," Schwarcz said. "Bringing robotics to the window cleaning industry really helps both sides of this coin: both the maintenance companies that now have systems they can put to work and the client that at the end of the day it gets cleaned windows."