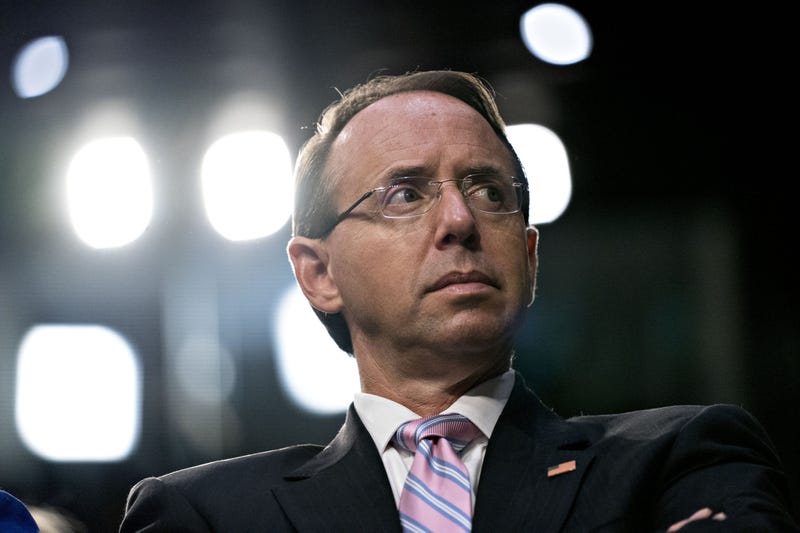 January 9, 2019 01/09/2019 9:04 pm
By Laura Jarrett and Evan Perez
(CNN) — Deputy Attorney General Rod Rosenstein, whose office manages the Russia investigation, is planning to leave the Justice Department shortly after William Barr, the president's nominee for attorney general, is confirmed, a source familiar with his thinking said.

The source said Rosenstein is not being forced out, and he has conveyed his thinking to the White House. The move may be the clearest signal to date that special counsel Robert Mueller's investigation is close to wrapping up.

The deputy attorney general has become a household name given his management of Mueller's work and has signaled to other officials that he would leave when he was satisfied that Mueller's investigation was either complete or close enough to completion that it was protected.

When exactly Rosenstein leaves could shift depending on the timing of Barr's confirmation and the naming of a new deputy attorney general. An official briefed on the discussions said Rosenstein wants to ensure a smooth transition, which includes the Mueller investigation.

Barr's Senate confirmation hearing begins Jan. 15, which means a confirmation vote, at the earliest, could occur in mid-February.

A source told CNN that Barr made it clear to the White House that he wanted his own deputy — a request that was honored the last time he served as attorney general under President George H.W. Bush.

"The attorney general's balls are in the deputy attorney general's pocket, and I'm not putting my balls in anyone's pocket I don't know," Barr recalled saying in a 2001 interview with the Miller Center of Public Affairs at the University of Virginia.

White House press secretary Sarah Sanders told reporters Wednesday that she hadn't spoken to the president about Rosenstein's plans but said the deputy attorney general is "doing a great job."

"I know that deputy attorney general had always planned to stay around two years. He would like to help with the transition of bringing the new attorney general in. We hope that happens relatively soon," Sanders said. "I know he wants to allow him to build a new team. He's doing a great job and we'll let him make any further announcements on that from here."

If confirmed, Barr would then oversee the Russia investigation. In a June 2018 memo to senior DOJ officials, Barr reached a decisive and controversial conclusion that President Donald Trump's interactions with ex-FBI Director James Comey would not constitute obstruction of justice. He defended Trump's firing of Comey and called the special counsel's obstruction inquiry "fatally misconceived."

It was Rosenstein who appointed special counsel Robert Mueller in May 2017 to investigate any coordination between Trump's 2016 campaign and Russians who sought to influence the outcome of the election after former Attorney General Jeff Sessions recused himself from the probe, citing his own role in Trump's presidential campaign. Rosenstein then oversaw the special counsel's investigation.

Trump has frequently criticized Rosenstein and called the Mueller investigation a "witch hunt."

In September, reports emerged that Rosenstein discussed wearing a "wire" to record conversations with Trump and recruiting Cabinet members to invoke the 25th Amendment to remove Trump from office, according to sources familiar with memos authored by former FBI Deputy Director Andrew McCabe documenting the discussions. Rosenstein strongly denied the report and Trump had maintained he had no plans to fire Rosenstein.

Nevertheless, in November, the president tweeted out a picture of Rosenstein behind bars.

Rosenstein remained in his role as deputy at the Justice Department when Matt Whitaker was tapped as acting attorney general after Sessions was forced out. Whitaker took on overseeing the Mueller investigation, but Rosenstein's office still manages it day-to-day.