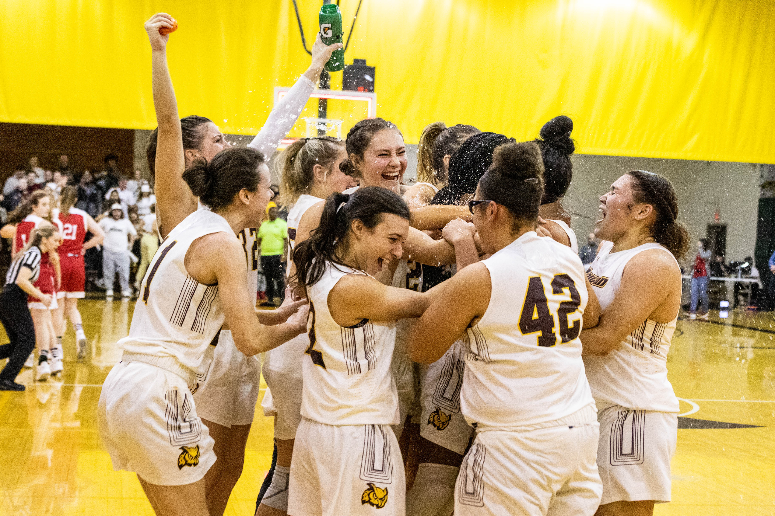 March 4, 2020 03/04/2020 10:29 pm
PHILADELPHIA (KYW Newsradio) — One of the most pleasant surprises on the local college basketball scene this season has been the emergence of the Division III Rowan University women's team down in Glassboro, New Jersey.

Picked to finish fourth in the New Jersey Athletic Conference preseason poll, playing under a first-year head coach in Demetrius Poles and featuring a starting five of all freshmen and sophomores (with no seniors on the roster), the Profs have been dominant since the season's start.

They are the champions of the NJAC and headed to the NCAA Division III Tournament with a record of 24-3. The Profs will open tourney play on Friday night when they take on the United States Merchant Marine Academy in the first round up in Amherst, Massachusetts.

"It is definitely a thrill," Poles told KYW Newsradio. "These young ladies deserve all the accolades. They put in a lot of work this year and they believed in themselves, despite being a very young team. So I'm very happy for the young ladies."

The Profs are an elite defensive team. They hold opponents to 63.1 points a game and 32% shooting from the field, with 28% shooting from behind the arc.

Rowan outrebounds its opponents by an average of almost 10 a game. That defense is anchored by sophomore center Ayanna Johnson, who pulls down 13.1 rebounds a night (fifth in the country) and for the season, she has blocked 96 shots (second in the country).

On offense, freshman guard Nicole Mallard leads the Profs scoring an average of 13.9 points per game.

Merchant Marine Academy is 23-4 on the season. The Mariners are also the champions of the Skyline Conference.

"They have good size, good strength," Poles said of the Mariners. "They want to pound you underneath in the post and that is their strength. They want a slower paced game, which is kind of the opposite of the way we play. But they are deliberate in their offense and they are tough defensively."

Poles talks about the message to his team as it prepares for the NCAA Tournament.

"The message is that we've worked so hard all season and we want to show the nation (who they are)," he said. "We showed the NJAC, we showed New Jersey that we can play. Now it's time to change that channel to, 'let's be nationally recognized and let people talk about us, starting now, for years to come. Let's put our imprint on this season and try to go out fighting and put a stamp on our culture. And to have fun and to cherish every moment.' You've got to have fun in these moments," he added.

The winner of this game plays the winner of Framingham State and Amherst in the second round on Saturday.

Rowan and Merchant Marine Academy get underway at 5:00 p.m. on Friday night.

i'm listening
I'm Listening: How To Deal With Mental Health When Your Parents Don't Understand
sports
Albert Pujols Passes Willie Mays for 5th on MLB’s All-Time Home Run List
news
4.5-Magnitude Earthquake Rattles Southern California on Friday Night
news
A Surge in Online Shopping for the Holidays Is Already On
music
'Elf' Star James Caan Reveals Why There Has Never Been a Sequel to the Christmas Classic
sports
David Ortiz Reveals He Had COVID-19: 'This Is No Joke'