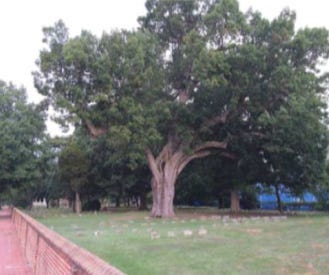 November 25, 2019 11/25/2019 9:30 am
ATLANTIC CITY, N.J. (KYW Newsradio) — Last June, a 500-year-old Salem Oak tree in the center of the city of Salem fell to the ground, but not before state workers managed to salvaged some of the tree’s acorns. And now, there are plans to spread those acorns across the Garden State.

There was a surprise from Department of Environmental Protection Commissioner Catherine McCabe at the annual League of Municipalities Convention in Atlantic City. It came in the form of a video recorded in a greenhouse.

“In celebration of New Jersey DEP’s 50th birthday and the 50th anniversary of America’s first Earth Day, we will be giving the gift of a Salem Oak seedling to each of New Jersey’s 565 municipalities,” McCabe said.

In celebration of DEP’s 50th birthday & the 50th anniversary of American’s 1st Earth Day, we are giving the gift of a prized seedling from the famed Salem Oak to NJ’s 565 Municipalities for planting this spring. For more info, check out our video: https://t.co/v6p42f2pMt pic.twitter.com/rYpko4tl6A

They’ll be distributed in the spring. The idea is for each town to pick a place where the seedling can thrive.

“In 50 years, these trees will have removed over two million pounds of carbon dioxide from our air,” she added. “They will conserve over 143 years’ worth of a household’s electricity. And they will reduce the damaging effects of over 27 million gallons of storm water.”

And in time, it’ll provide much of the same picturesque view and shade that Salem’s 100-foot-tall oak provided for so long. Consider the average life span for a Salem Oak tree is 200 to 300 years.