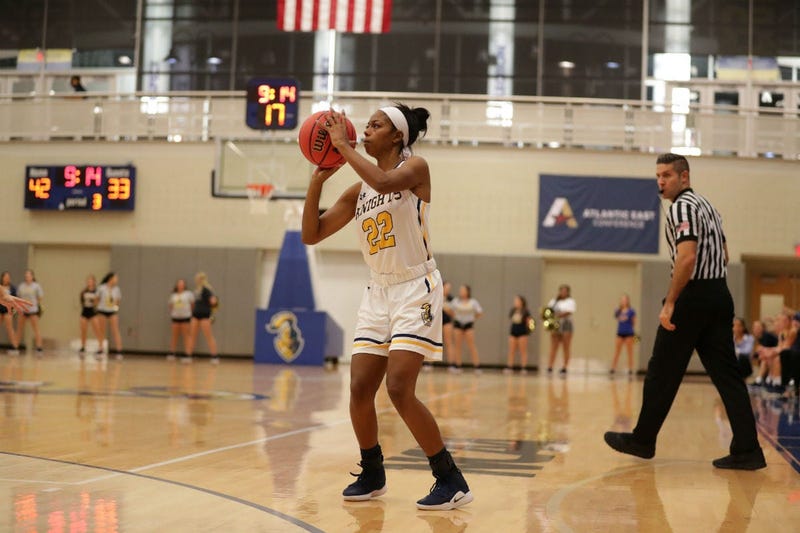 Saunders is a 5'7" guard who hails from Coatesville. This past Saturday, in the midst of a 35-point, 10-rebound performance in a win over the University of Valley Forge, she became the all-time leading scorer in the history of Neumann women's basketball. She now has 1,871 career points.

"I think it's just a symbol to show all my hard work throughout the year since I've been younger and throughout college," Saunders said of the record. "Just shows how much I really worked, how hard I really worked."

Saunders averaged 10.9 points as a freshman and then upped that to 16.5 points a game as a sophomore. As a junior, she poured in 19.3 points a night but here as a senior she has taken her game to another level. Saunders is currently second in the country in Division III in scoring average at 26.3 points per game. She breaks down her game.

"I'm pretty aggressive on the court," she said. "I like to attack the basket. Drive and kick when everybody collapses on me. My mid-range is okay. I'm not a big three-point shooter. I like to get to the free throw line. I've been doing well with my free throws."

That is an understatement. Saunders has extraordinary free-throws numbers both when it comes to volume and percentage. This season she leads the nation with an incredible 283 free throw attempts (an average of nearly 12 a game) and she has made 223 (also tops in the country) — that's 84 percent. In addition, she holds the Neumann career records for free throws attempted (777) and free throws made (598). Amazingly, she says foul shots used to be an issue for her.

"In high school, I struggled at the free throw line," she said. "I was probably like a 50 percent free throw shooter. I tried to focus on that in college, because I knew I would be going to the free throw line and I knew they're obviously free points. I knew I had to cash out on those."

Saunders also is getting it done on the glass, averaging 8.3 rebounds a game (second on the team) and she is tops on the squad with 79 assists and 45 steals.

Saunders has one regular season game left in her college career, Saturday against Wesley. Then it's the post-season and whenever that comes to an end, so does her time as a Knight.

"I definitely think about that right now and as the season's going on," she said. "Every day I'm thinking, 'My college career is soon coming to an end.' It doesn't seem real to me but I'm grateful for every opportunity and I go out every game playing hard, with heart."

Neumann's game on Saturday against Wesley gets underway at noon down in Dover, Delaware.