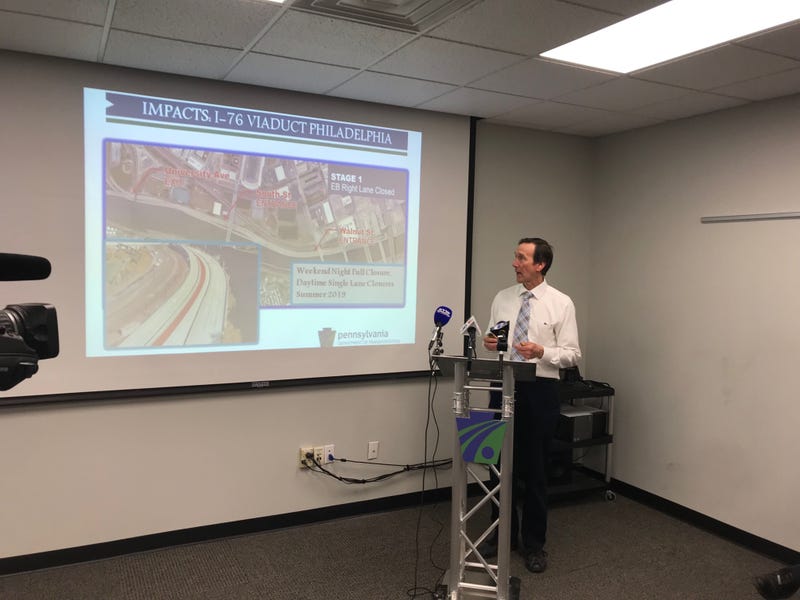 Two projects are coming to the Schuylkill Expressway. One starts on the bridge that carries I-76 over Route 23 in West Conshohocken, which will result in one-lane overnight closures.

But the other major project conquers the structure that carries the highway along the bank of the Schuylkill River from 30th Street to University Avenue.

Construction on the latter will force overnight lane closures on the Schuylkill Expressway and complete closures of the highway overnight on weekends.

"Both of these structures are currently on the low end of fair condition, and we have to keep them from falling into poor condition," said Chuck Davies, PennDOT assistant district executive.

During weekdays, two lanes in both directions will be open. At night during weekdays, as well as during the day on weekends, one lane will be closed.

Overnight on weekends, both lanes will be closed — first eastbound, then westbound.

The South Street, Walnut Street and University Avenue ramps will also be affected.

One-lane overnight closures begin to take effect Thursday. Weekend night closures won't occur until mid-June. The construction projects will last through the end of next year.

PennDOT said it will work with sports teams, the city, and others to try to limit closures during major events, like future Eagles games, Penn Relays or Penn commencement. But for trips to or from the shore, or to or from Phillies games, PennDOT advises to plan ahead — or consider a different route.