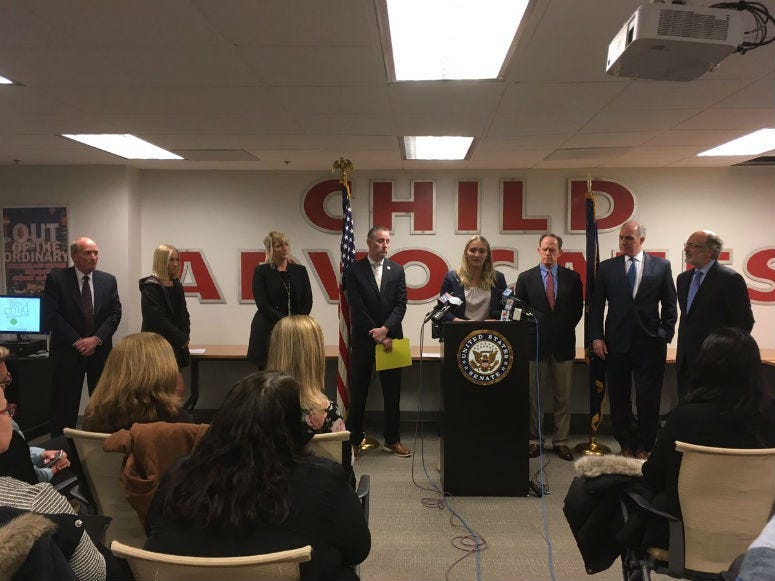 April 1, 2019 04/01/2019 8:55 pm
BUCKS COUNTY, Pa. (KYW Newsradio) — A young woman from Bucks County and her family don't want anyone else to go through what she did - because of a convicted cyberstalker. Now, the U.S. Senate is poised to act on a bill already passed in the House that provides for increased prison time for stalking minors.

Congressman Brian Fitzpatrick authored the legislation in the House, after he heard the plight of Madison Zezzo, who was stalked as a 13-year-old by a friend's father on social media.

"It allows judges who are sentencing criminal defendants in these cyberstalking cases to enhance that sentence by five years where that victim was a minor," Fitzpatrick said.

Despite harassing Zezzo online by texting her sexually explicit messages, the then 51-year-old stalker pleaded guilty only to a misdemeanor stalking charge, and got probation and counseling. Three years later, in 2016, the same stalker resumed his pursuit of  Zezzo. This time, he was caught in a sting and sentenced to 18 months to seven years in prison.

U.S. Republican Senator Pat Toomey says when he was stalking her, he posted over 15,000 times about her.

"Including horrendous, doctored images of Madison. The fact is, social media creates a new opportunity for monsters to engage in this kind of activity," Toomey said.

Standing next to Toomey, Democrat Bob Casey agreed that they expect the Senate to pass the bill with bipartisan support.

Zezzo is now a 20-year-old sophomore in college.

She hopes it draws more attention to inadequacies of state and federal stalking laws and the protection of victims, especially children.

"I feel it's crucial that victims' rights be reevaluated. Often times, I felt that my stalker had more rights than I did at the criminal proceedings," Zezzo said.

While the process has not been easy,  Zezzo refuses to let it define her.

"You hear about the escalated crimes of violence - the rape, the sexual assault and the homicides. But the vehicle the criminal uses to get there, is often not spoke of, that's stalking," she said.