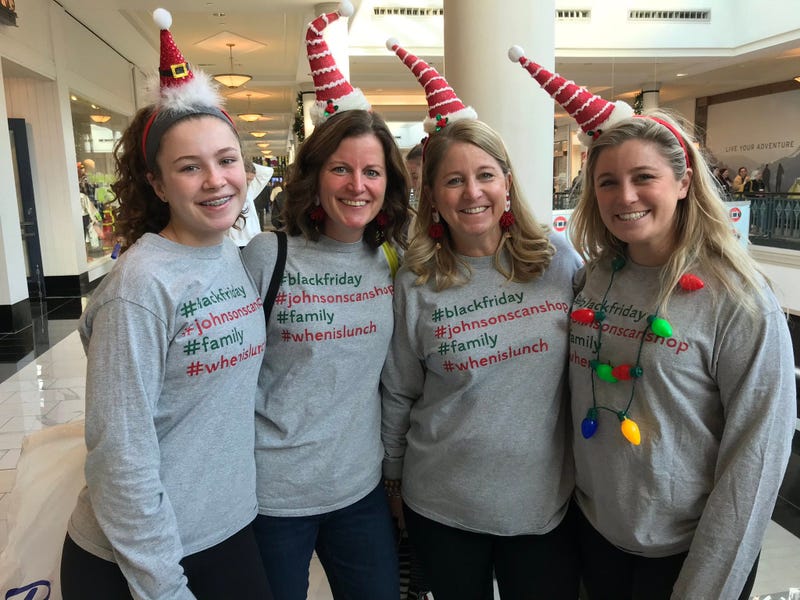 Before that, the buzz was at Starbucks, where people were looking for some caffeination to fuel their bargain hunting.

Among those ready to spend was 17-year-old Abby Keenan of Doylestown. She was with her friends from Dock Mennonite Academy in Lansdale. She said they could barely sleep.

"We've been planning this for such a long time," Keenan said. "We woke up so early today, and we were an hour early, so we waited in the car for a bit."

Shoppers who spoke to KYW Newsradio on Friday said that, despite the convenience of online shopping, there's nothing like the experience of being out, especially on the day the holiday shopping season kicks off.

Shawn from New Jersey says she needed to be there in person.

"Because I like to try things on. And with shopping online, you get the item but you might have to send it back," she said.

There are deals, plenty.

"Forty percent off everything in the store," said Mary Kinka from West Chester, "so we did really well in there. Got some pollyanna presents out of the way."

According to one sign outside of a department store, some merchandise was up to 80% off.

But for shoppers like Kinka, Black Friday shopping goes beyond saving a few bucks.

"We did it for years and years and years with my mom. She has since passed away, so we're just carrying out the tradition with my sisters and my nieces and my daughter," she said.

All of them with Santa hats and matching shirts.

Black Friday is also a tradition for a mother-daughter duo from Central New Jersey.

"The deals are amazing, and we're here for a very long time," said Erica Cedar. She and her mother, Ethel Mae Littig, wore matching shirts reading "Black Friday Besties" across the front.

The pair use an empty baby stroller to haul around the gifts they buy for their family.

"It's easier to carry, and you have more stuff you can put in there. You can just load it up until it overflows," Littig explained. "It's our muscle."​