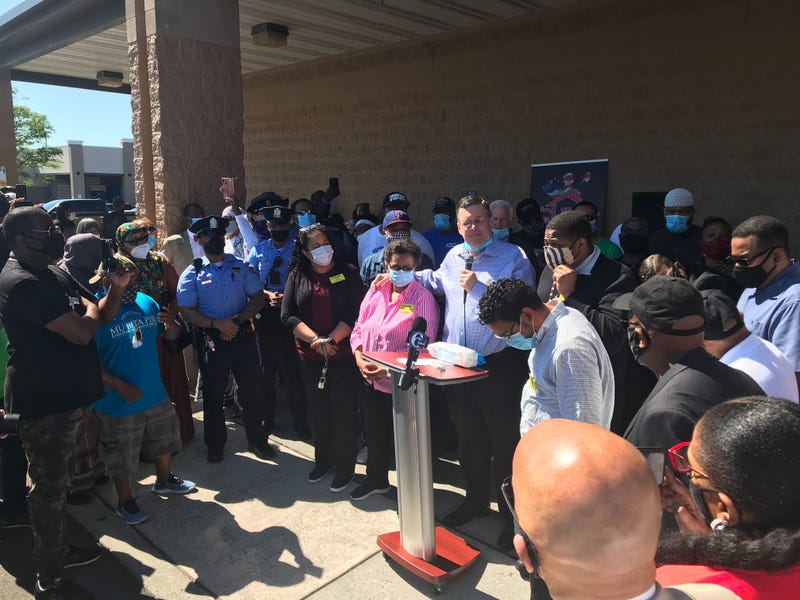 PHILADELPHIA (KYW Newsradio) — The Brown ShopRite store at 52nd Street and Parkside Avenue in West Philadelphia reopened Monday — a week after being destroyed by looters. The reopening was a community effort.

Robin Richardson Bey and her mother have shopped at the store for many years. When they heard it was looted, “I just cried and cried because it was just really disappointing,” Richardson Bey said.

So when it officially reopened Monday morning, she was one of the first shoppers to show up — along with hundreds of others.

“I feel good because we overcame and got these stores open in a big way,” said Jeff Brown, owner of Brown ShopRite, who hugged many of the neighborhood residents who stopped to say thank you.

“Through this whole crisis, I relied on the love of the community and people I’ve relied on for years to get through this,” added Brown.

His 300 employees worked in three round-the-clock shifts to clean up the store and get it back online. They brought in outside companies as well to help clean up and repair the millions in damages.

Looters damaged every register and checkout lane, leaving the store in shambles.

But to sweeten it all, 200 community volunteers helped out, too.

“It just makes me feel like, look what we can accomplish if we work together,” Brown said.

Now, the ParkWest Town Shopping Center is a mainstay, with a Lowes and several other stories. They were all looted as well, but the community wants them back.

State Sen. Vincent Hughes said with extra private security hired to keep the shopping center safe, the goal is to get the rest of the businesses open as soon as possible.

“The strength of this store is a testament to the community investment that was made here 15 years ago,” Hughes said.

There’s still a strong national guard presence at the plaza on Parkside where #BrownShopRite is reopening. @jeffrey60533845 said he’s hired more security and is hoping they won’t need these soldiers much longer. #looting #phillyriots @KYWNewsradio pic.twitter.com/fswSKzccob

But Brown noted during his speech that a number of small businesses all along the 52nd Street corridor were severely damaged by looters.

He’s the cofounder of the PA30DayFund, which has helped scores of small minority-owned businesses hurt by the pandemic, giving forgivable $3,000 loans that are very easy to apply for.

Since the riots broke out following protests calling for justice for George Floyd, the fund expanded to helping those hurt by the looting.

“It’s overwhelming how good people are,” said Jeff Bartos, co-founder of the fund.

He said their goal was to raise $100,000 to help looted businesses, but they have exceeded the goal.

“We’re going to step up and we’re going to help as many people as we can at this time,” Bartos said, noting they’ve given away nearly two dozen awards of cash to small businesses, and are giving more each day.

Muhammad Siddique, whose business on 52nd Street was destroyed by looters, received one of the grants.

“It’s really helped me restart up my business,” he said.

Tracey L. Fisher, who runs Gateway to Reentry, said he’s worked with Brown Shoprite on numerous occasions. The store has hired hundreds of returning citizens, providing them opportunities for promotion.

So many came out to support @jeffrey60533845 on the reopening of Brown ShopRite Parkside. Hundreds of ppl helped clean up so they could reopen a week after looting ravaged store. @KYWNewsradio #phillyprotest #looting #Healing pic.twitter.com/cibrVORVhh

Brown said he’s not angry about what happened. Instead, he’s focused on solutions — one of the reasons why dozens of churches backed Brown and provided support, making sure residents were there day one to shop.

“I got some crab legs, don’t mess with me girl,” laughed Pamela from West Philadelphia as she spoke to KYW Newsradio. “I am so glad this store reopened, because if it didn’t, I’d have to drive to Delaware County to get fresh food.”

The Brown ShopRite on Fox Street in North Philadelphia was also looted, but reopened Friday.