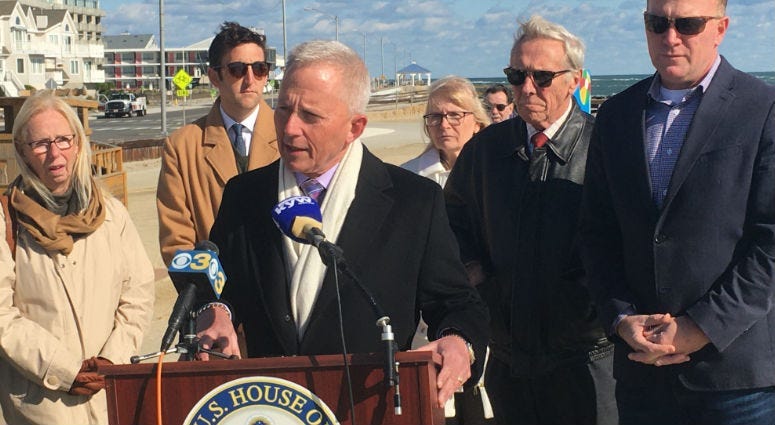 November 8, 2019 11/08/2019 8:06 pm
NORTH WILDWOOD, N.J. (KYW Newsradio) — A two-year-long dispute over how to do beach replenishment down the shore has been settled, with the federal government overruling their own fish and wildlife officials and siding with locals, with the help of their local congressman.

"These three communities are not going to be rolled anymore by low level management from U.S. Fish and Wildlife that make decisions on ego instead of science,” Pagliughi told KYW Newsradio.

"You would think that an agency with the name Fish and Wildlife would actually be in the business of preserving fish and wildlife,” he said. “This interpretation did the exact opposite”

"We’re utilizing what used to be called dredge spoils for fill in order to save money and protect the area around us,” Van Drew said, “and also create a conducive environment for the piping plovers and the birds that are here."

Fish and Wildlife was bypassed in 2012 in the Obama administration over the same issue. If there’s a court challenge, local officials insist they’re ready to fight.

But some suggest the timing of the change is ironic, given Van Drew’s vote in the House against an impeachment inquiry.

He was one of only two Democrats to do that.

"To think that I would actually vote a certain way on an issue that is as serious as this and quite frankly go through the process that I did to make that decision for some sand is just absurd,” he added.

Van Drew insisted the process is a waste of time and money, given Republicans who control the Senate are not likely to convict President Donald Trump on any articles of impeachment the house may approve.