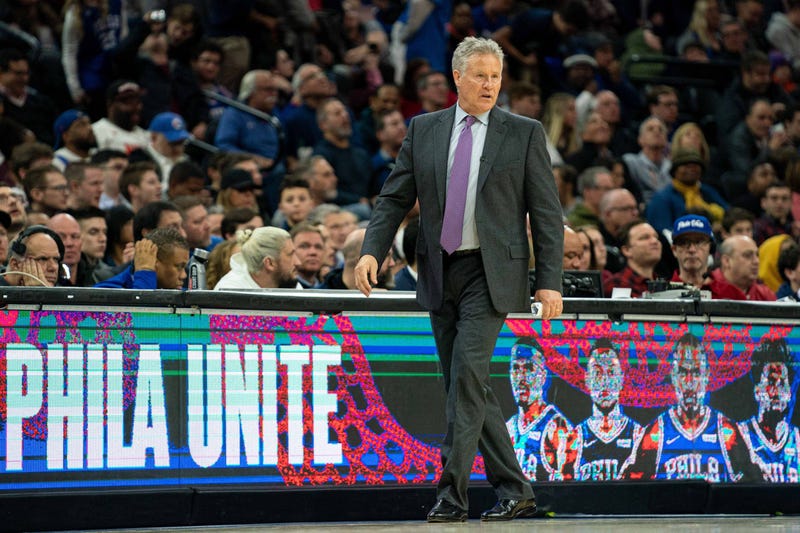 Shortly after the Sixers beat the Detroit Pistons, word spread the NBA suspended its season after Utah’s Rudy Gobert tested positive for the coronavirus. Instead of coming out for his usual postgame press conference alone, Brown was joined by General Manager Elton Brand to talk about the unprecedented developments.

After two months and four days, it was obvious he missed that sense of normalcy, albeit this time it was through a Zoom chat.

The session was supposed to go for about 30 minutes. Shortly after it began, Brown, who was energetic and sounded eager to resume the season, said he’ll go as long as everyone needs, and answered questions for roughly an hour.

“We’re all sort of jumping to get going again,” Brown opened.

Brown brought up and was asked about the very popular Michael Jordan documentary, “The Last Dance”— something he feels has, in a way, filled the void left by no live sports.

Brown said he’s been going on long walks with his wife and dog, who he joked is now the “fittest” dog in Philadelphia.

“Even without our work, I’m shocked at how quick the days go,” he said.

But, that doesn’t mean he’s not itching to get back. Brown and the 76ers have been preparing and plan to be ready if the season resumes.

“We’re gonna hit the ground running,” Brown said. “What makes that sentence whole is the players’ responsibility to come in with a fitness base.”

Speaking of players, two that were unsurprisingly asked about were Ben Simmons and Joel Embiid.

Simmons has been rehabbing a nerve impingement in his lower back, one that Brown described with new detail.

“For those of you who remember in Milwaukee (on Saturday, Feb. 22), for me that was as disturbing a memory as it relates to a player that I can think of,” Brown recalled. “He’s lying on his back. He’s vomiting primarily because of pain and trying to get him back on the plane and to build him back up to some level of health where he can play basketball again and with us and that timeline was always an interesting one. But the effort that he has put in given where he was and the significant — the effort that he has put in under the restrictions that are all on top of us, he is to be praised and applauded in a real way, a significant way.”

Brown considers it a possible silver lining that the pandemic gave the Sixers time to get Simmons back for the entirety of their playoff push if the season returns.

As far as Embiid, Brown said he’s had many conversations with the center and, “he’s got a real desire to be at a playing weight that equals his best since he’s been in the league.”

Right now, some NBA practice facilities are open for restrictive individual workouts. The Sixers training complex, based in Camden, isn’t one of them.

However, Brown doesn’t view that as much of a disadvantage for his team and believes if they’re able to resume, three weeks will be needed to prepare the team for the season restarting.

“When it’s go time, I feel like I’m studied enough, I’m healthy enough that I will dive into this with my players in a significant way,” he said.

In terms of potentially playing in empty arenas, he realizes that’s not optimal for the Sixers, who were 29-2 at Wells Fargo Center this season, but it’s manageable.

“Playing in front of no fans, especially our fans, isn’t ideal. It’s not ideal. Do I think it will water down the competitive side? I don’t,” he said.

If the season doesn’t resume, that leaves the question of what will happen with Brown, who is in his seventh year as the head coach of the franchise.

At 39-26 when everything stopped, many outsiders felt this was an underachieving season. Brown’s job security has been a topic of conversation for several years, to the point where he has even acknowledged in the past that the public talks about that topic.

Many felt in order for Brown to return next season, the 76ers would have to advance past the second round. But, what if there is no postseason?

“You’re human,” Brown said. “You think about it all the time. I wouldn’t you say you think about it to the point it weighs you down, but I get it. I’ve been doing this for a long time. And I feel this strongly — is as it sits in my sort of coaching world, this thing is so, for me, incomplete. We had our starters 19 out of 65 games. I think that this team was built for the playoffs. Like every team you get some not fortunate injury situations. We need to be better on the road. We weren’t. We were dominant at home. And somewhere in the middle I felt everything was pointing to us landing the plane, getting good health and letting that environment be judgement,” he said.

For Brown, his focus remains getting back and accomplishing their goal.

“I’ve been with you and the city for seven years. We’ve gone through naviculars and pandemics and five GMs and 100-whatever players and here we are, and I feel that it’s incomplete. We need to be able to come back to the table, take the team that we have, the work that we’ve been putting in and let that be judgement day.”

And the time off, to Brown, is not an excuse for his team not being ready to go on a roll if they’re able to play games again.

“The mission has been, and will be: we need to hunt for a championship,” he said.