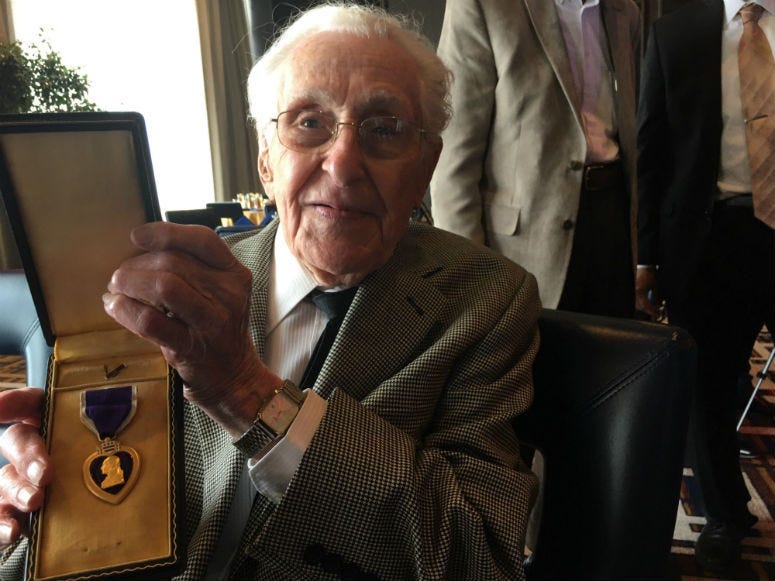 PHILADELPHIA (KYW Newsradio) — A South Philadelphia man brought his World War II medals and memories to a party the city holds every May for centenarians.

Charlie Leuzzi was a 23-year-old Army sergeant with the 8th Division stationed in Ireland when word came down that he would be part of the follow-up force at Normandy.

He landed on Omaha Beach 28 days after D-Day.

"They took us right across the ocean to where they (the invading force) broke in. We started from there. And we saw all the high spots and everything that the guys in front of us had done. And they done a lot of work," Leuzzi said.

Leuzzi says he felt he was a part of something special when he went in.

From Normandy, Leuzzi and his comrades fought their way through France and into Germany, where they got bogged down in the meat grinder known as the Battle of Hurtgen Forest.

It's a fight that's gone down the memory hole, for the most part, and for good reason.

History is written by the victors, and in this case the victors don't want to talk about one of the U.S. Army's worst defeats - six months of fruitless, senseless attacks that were beaten back repeatedly by the well fortified German defenses in dense, wooded terrain.

Machine-gunner Leuzzi was right in the thick of it.

The Americans suffered 33,000 casualties, and Leuzzi was one of the wounded.

"I got hit twice. The first time wasn't that bad. But the second time I got shrapnel in my leg. They took all the big pieces out and then they told me I got more. So I told the doc 'take them out.'  He says 'well look, if we take a dig in there we might hit some kind of vein or something and then you can't walk.' And I blew my top, can't walk?  I say I wanna dance!" Leuzzi said.