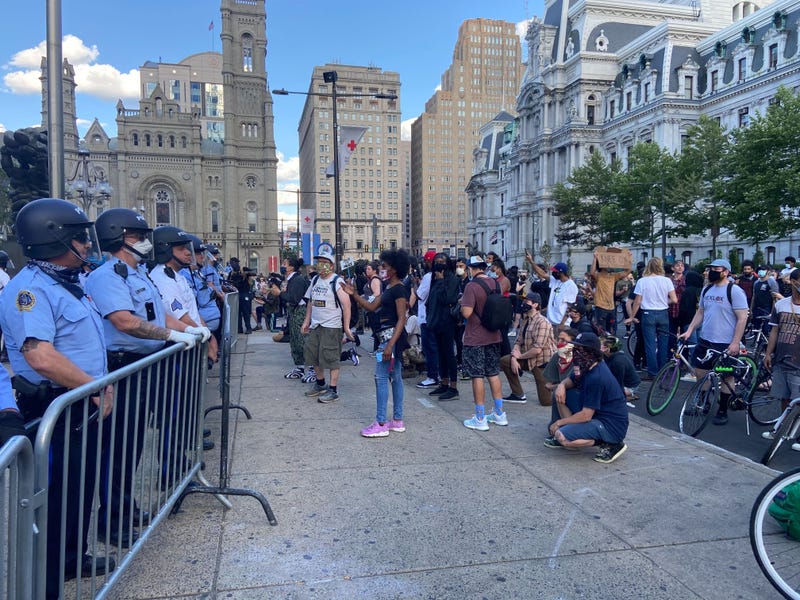 Jenkins posted on Instagram, in part, "For now, all of the attention is being given to the destruction of agitators. This sends the message to us all that this is the only way to be heard. Don’t let the chaos drown out the message, otherwise we’re doomed to repeat history again.”

The world sees now that their decision to ignore those who were/are committed to peacefully responding to the violence perpetuated against them, was a grave mistake. For now, all of the attention is being given to the destruction of agitators. This sends the message to us all that this is the only way to be heard. Don’t let the chaos drown out the message, otherwise we’re doomed to repeat history again. #justiceforgeorgefloyd #nojusticenopeace #areyoulistening #blacklivesmatter✊--

Current Eagles safety Rodney McLeod posted said on Instagram that defacing communities is not the answer to change injustice and systemic racism.

As a black man, it’s been a painful and disturbing time throughout our nation and city; the ugly reminders of injustice and systemic racism will continue to haunt us as a country until we enact change. Peaceful protest, lifting our voices in solidarity, and civil-engagement are all a part of the change process. Defacing our communities only offers a shortcut to the progress we all want to see. I believe we as a city can rise out of this pivotal moment stronger, we have an opportunity to course-correct for our future’s sake, and together, each of us can reflect the attitude necessary to be better and do better. I am encouraging us all to speak our peace. #georgefloyd #justiceforgeorgefloyd

“Looting and violence distract from the strength of our collective voice. To assuage this death and begin the community’s healing, city and police leaders need to look at the culture they’ve created and ask the hard questions”. Part of a statement from George Floyd's family. https://t.co/ns0srlerqR

Harris marched on the Benjamin Franklin Parkway on Saturday.

On Sunday, the Sixers released a statement saying the racism, prejudice and injustice the Black community and people of color continue to face is unacceptable and can’t be tolerated.

"Now, more than ever, we must strive for accountability, including ensuring that our community is treated with fairness, transparency and dignity. We must stay united and strong during the conflict and hurt we are experiencing,” the statement read, in part.

A statement from the Philadelphia 76ers. pic.twitter.com/saDLjPDoF4

Sixers All-Star Ben Simmons tweeted, "It is time for everyone, from all walks of life, to get comfortable with voicing & calling out the uncomfortable subject of Blatant Racism that exists heavily within our society. We are ALL accountable & we shouldn’t have to revisit tragedies like George Floyd or Ahmaud Arbery time & time again. Enough is enough."

Former Eagles quarterback Nick Foles put out a statement that read, in part, "My heart is with the black and brown communities and for the family of George Floyd. Tori and I are constantly praying for y’all."

Foles added that his favorite part of playing football includes playing with men from different backgrounds and races.

"The beautiful thing about playing football has been the diversity within the locker room," Foles wrote. "Men come together to achieve the common goal of winning games no matter what their background. To do that they must love one another, genuinely. It becomes a real brotherhood."

Foles later added, "Sports show us what is possible when we stop looking at the difference in skin color and look at the heart of an individual."

We’re taught to look up to police officers and that they’re our hero’s I remember in elementary school officers came up to the school and showed us their badges and cars it was the coolest thing ever.But whose suppose to protect us when the hero’s are acting like the villains...

Foles' and Mills' statements came a few days after Eagles quarterback Carson Wentz and tight end Zach Ertz expressed their heartbreak over what happened to Floyd in Minnesota.

Basketball icon Michael Jordan said in a statement he is "deeply saddened, truly pained and plain angry. I stand with those who are calling out the ingrained racism and violence toward people of color in our country. We have had enough."

Jordan said, in part, "We must listen to each other, show compassion and empathy and never turn our backs on senseless brutality. We need to continue peaceful expressions against injustice and demand accountability. Our unified voice needs to put pressure on our leaders to change our laws, or else we need to use our vote to create systemic change."

Former NBA player Stephen Jackson, who was a friend of Floyd, held a press conference on Friday to speak about his frustration.

Los Angeles Clippers head coach Doc Rivers tweeted a statement that read, in part, "The response we are seeing across the nation, to the murder of George Floyd, is decades in the making. Too often, people rush to judge the response, instead of the actions that prompted it. ... November is the time to vote. Your words carry a lot of weight and your ballots carry even more. The day has come to confront real problems, and be part of the solution."

The NHL said the league stands with anyone who is "working to achieve a racially just society, and against all those who perpetuate and uphold racism, hatred, bigotry and violence."

Meantime, the statement from NFL Commissioner Roger Goodell was not well received by some on social media.

Goodell stated, in part, "As current events dramatically underscore, there remains much more to do as a country and as a league. These tragedies inform the NFL's commitment and our ongoing efforts. There remains an urgent need for action.”

Many other frustrated replies highlighted what has happened with former 49ers quarterback Colin Kaepernick, as well as the way the NFL handled the situation of kneeling during the National Anthem.

Torrey Smith, a retired wide receiver from the Eagles Super Bowl winner, who also played for San Francisco, shared a different view, tweeting that he is "grateful for his commitment to the Bay and injustices everywhere. Thanks @JedYork !"

I’ve had countless conversations with Jed about these issues when I was in SF. I’m grateful for his commitment to the Bay and injustices everywhere. Thanks @JedYork ! https://t.co/UNJzHLg1Nj

I was there and watched the way he handled the Kap’s protest. He was willing to support in anyway possible and was trying to figure out and understand how to help. I never heard him say “don’t kneel one time”. He focused on helping. He has my respect forever. https://t.co/4DEnO8eZXf