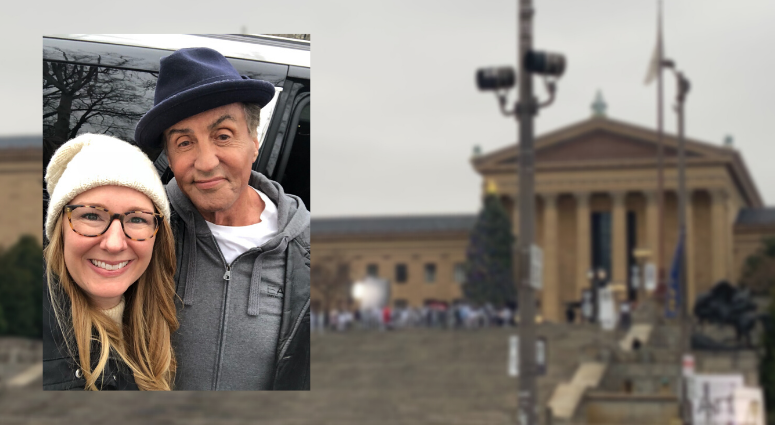 December 16, 2019 12/16/2019 9:42 pm
PHILADELPHIA (KYW Newsradio) — Jeanette White was hoping to spend the last day of her first trip to Philadelphia running up the Rocky steps, but when she got to the Philadelphia Museum of Art, they were closed off.
“We were about to walk away when we saw this guy running for his life with a red boxing glove,” she said. “We turned around and we saw the car, and he was getting out.”
That “he” was Sylvester Stallone, who congregated at the steps with dozens of Rocky wannabees to shoot a Super Bowl commercial, sources told KYW Newsradio.

“I never fan-girl on people, but for some reason, I freaked out,” White admitted. “I was so excited.”

Stallone teased in a post Monday that he will be revealing something “extraordinary” in the coming months. He also encouraged fans to “keep punching.”

Back in Philadelphia right now on this 33° freezing morning. We are doing something that is going to be VERY special and you’ll be seeing it soon, so hang in there and go for it!!! #KeepPunching pic.twitter.com/xokvSaYVFx

Ok I had to come over and see the Rocky inspired FB commercial being filmed pic.twitter.com/fpnpOZVOcW

White got a selfie with Stallone, and she can’t wait to bring this story back to Seattle with her.

“It's literally the most epic, classic thing I could ever imagine,” she said.