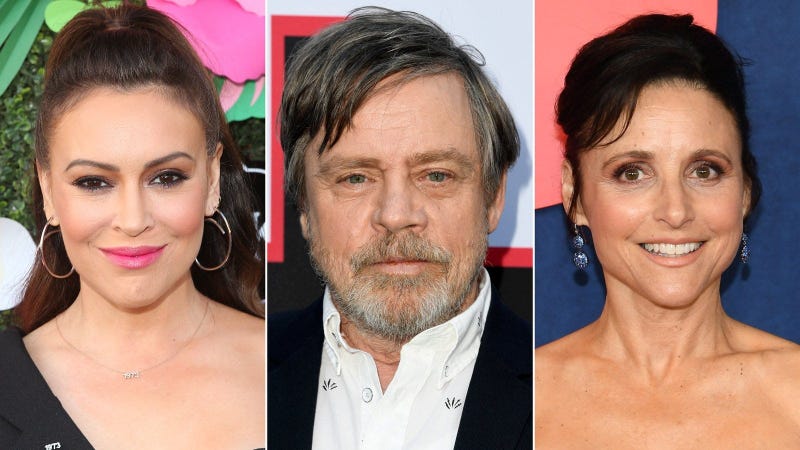 By Kate Sullivan and Paul LeBlanc, CNN
(CNN) -- A collection of stars participated in the telling of a political drama filled with intrigue, foreign adversaries and dreams of power.

But it wasn't Shakespeare: It was the Mueller report, adapted for the stage.

Stars such as Julia Louis-Dreyfus, Mark Hamill, John Lithgow and Alyssa Milano performed Monday night in a play based on the special counsel's report into Russian interference in the 2016 US election.

"The Investigation: A Search For the Truth in Ten Acts," was live streamed by Law Works, which hosted the event.

"Join us for an historic live play in 10 acts ripped from the pages of the Mueller report," their website reads.

The play was written by Robert Schenkkan, who received the Pulitzer Prize for Drama in 1992 for his play "The Kentucky Cycle." His play "All the Way" earned the 2014 Tony Award for best play.

"The play lets the facts and Mueller's words tell the story of a President who likely obstructed justice and a campaign that not only knew Russia wanted them to win, but welcomed it," David Wade, the executive director of Law Works, told CNN in a statement.

After the reading of dialogue from the different players, the actors and actresses read excerpts from both Attorney General William Barr's and Mueller's news conferences. To conclude, they read portions of the Constitution about impeachment, and continued to give examples of why they believe the President is guilty of obstruction.

Louis-Dreyfus and Hamill recorded videos for the performance, according to Kevin McAlister, a spokesman for Law Works.

Law Works "engages bipartisan voices and educates the public on the importance of the rule of law, the role of the special counsel in the justice system, and the integrity of our judicial institutions," according to their website.

After years of investigating, the Department of Justice released a redacted copy of Mueller's report in April. Mueller's investigation into possible obstruction of justice could not clear Trump, and the redacted report details numerous cases in which Trump asked his aides to take actions that would have obstructed the investigation, but stated they were unsuccessful because the aides refused his orders.

Mueller says in the report the investigation into possible collusion found members of the Trump campaign knew they would benefit from Russia's illegal actions to influence the election, but didn't take criminal steps to help.

The play comes weeks before Arena Stage in Washington, DC, is set to present an 11-hour marathon reading of Volume 2 of the Mueller report, The Washington Post reported.

Guest readers will follow the model of the 24-hour reading in New York of the full report, the Post reported. Readers for the July 11 reading include local political figures like DC Delegate Eleanor Holmes Norton and DC council members David Grosso and Charles Allen, according to the Post.

CNN previously reported publisher IDW is planning to turn the 448-page Mueller report into lighter reading by making it into a graphic novel. The editor of the book, Justin Eisinger, said a graphic novel would increase the number of people who are informed about Mueller's findings.