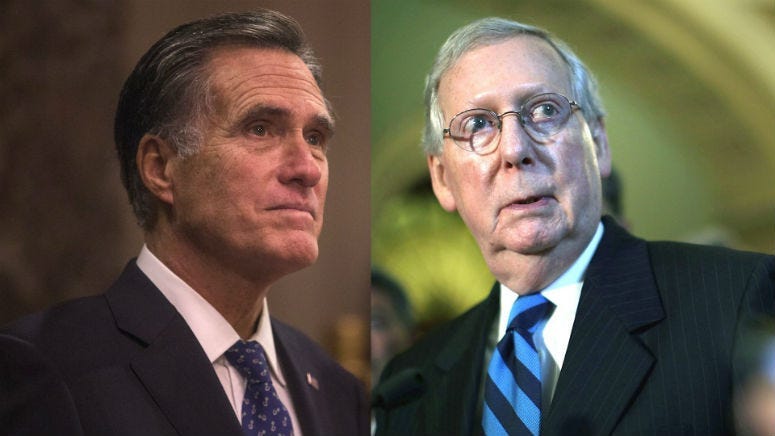 McCarthy announced that the House Republican Steering Committee -- which oversees committee assignments -- met Monday night and made a decision that King "will not be serving on committees in this Congress."

Earlier Monday, a pair of the Senate's most high-profile Republicans on Monday sharply condemned King, the highest ranking GOP officials to publicly rebuke King after comments he made to The New York Times that were sympathetic to white supremacists.

The criticism from Senate Majority Leader Mitch McConnell and Utah freshman Sen. Mitt Romney, comes as the House plans to vote as soon as Tuesday on a resolution to disapprove of the actions of King, who has a history of making incendiary comments related to race and immigration.

"There is no place in the Republican Party, the Congress or the country for an ideology of racial supremacy of any kind," McConnell said in a statement released from his office. "I have no tolerance for such positions and those who espouse these views are not supporters of American ideals and freedoms. Rep. King's statements are unwelcome and unworthy of his elected position."

McConnell added, "If he doesn't understand why 'white supremacy' is offensive, he should find another line of work."

McConnell's statement was first reported by The Washington Post.

Romney told CNN that King should "step aside."

"I think he ought to step aside and I think Congress ought to make it very clear he has no place there," the 2012 Republican presidential nominee said on Capitol Hill.

In an interview with the Times in a story published last week, King asked, "White nationalist, white supremacist, Western civilization — how did that language become offensive?"

More of the House response

The comments caused widespread outrage, including from many members of his own party. Several high profile lawmakers called for King to be stripped of his committee assignments.

The House will vote as soon as Tuesday on the resolution to disapprove of King, Democratic sources told CNN. The resolution being proposed by South Carolina Rep. James Clyburn, the No. 3 member of Democratic House leadership and the highest ranking African American member of Congress. The resolution however is not as severe as a censure resolution that other Democrats -- like Rep. Tim Ryan of Ohio and Bobby Rush of Illinois -- are proposing.

King met Monday afternoon with McCarthy of California. McCarthy, the top Republican in the chamber, said over the weekend that King's language has "no place in America" and that "action will be taken."

"That is not the America I know, and it is most definitely not the party of Lincoln," McCarthy told CBS' "Face the Nation" on Sunday. "I have a scheduled meeting with him on Monday, and I will tell you this: I've watched on the other side that they do not take action when their members say something like this. Action will be taken. I'm having a serious conversation with Congressman Steve King on his future and role in this Republican Party."

King did not answer reporter questions Monday after his meeting in McCarthy's office.

On the floor of the House on Friday, King said his comments were taken out of context, saying he rejects white supremacist ideology and labels on individuals.

"I regret the heartburn that has poured forth upon this Congress and this country and especially in my state and in my congressional district," King said on the floor. "But the people who do know me know I wouldn't even have to make this statement because they know my life they know my history, they know that I have lived in the same place since 1978."

As he left the floor, King was asked by reporters if he was worried about losing his ranking member position on a House Judiciary subcommittee.

"I've had no discussion about that. I haven't given it any thought," King said. "But the more you guys write about that stuff, then it becomes an issue."

This post has been updated with additional developments Monday.